One of the most important aspects of recovery from my alcohol habit is...believe it or not, to put it in the past. To remember it like a bad nightmare that I finally awoke from. I know this is contrary to what many substance abuse programs teach, but the truth is, I'm doing better solo now than attending group meetings. I do plan one last visit to my therapist, just to touch base and let her know my plans.

At any rate, I want to get on with my life. After all, I didn't drink for 55+ years, so I choose to look at my alcohol problem as a response to my husband's death -- and not resolving the loss issues. It was a temporary solution to a permenant problem; I do think I've resolved some of the lingering loss issues, though I've come to accept I'll always miss him and sometimes lapse into grief and sorrow. I try to curb thinking: "What if..." Or, "By now, he & I would have done this or that..." None of that can ever happen, and it's best to stop that line of thought before it gets out-of-hand and triggers a need to escape via alcohol.

I am very aware of the triggers that lead to drinking, and try to stop such thoughts. As well, I have decided I have a lot to live for, banishing the suicidal thoughts I had during my bouts with alcohol. In other words, I feel able to deal with the underlying causes of turning to drink.

I just don't want to spend the remainder of my life being involved in treatment or even helping others with drinking problems. I tried that with my own father -- who was an alcoholic. Never had much success either. Being around reformed male alcoholics remind me of the terrorizing childhood I had, so that is something I need to avoid. AA here had lots of those males, moreso than the female members.

What am I saying here to myself? I want to always be aware of my weakness for alcohol, but I'm determined never to let it rule my life again. Five years was enough, and plenty to make me walk a road I never want to travel again.

A beautiful, mild, sunny day. Already took the dogs on a long walk, and now it's time for baths. I laundered their bedding this morning, have it hanging on the clothesline to air dry.

I'll end with this one last picture of my late husband and I. Remember, this was taken in 1972...thus his long sideburns and my hairstyle. My old photos like this one are starting to fade, as if the past itself is moving into a disappearing realm. 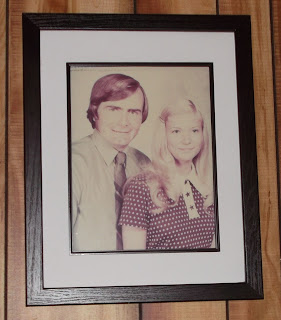 That last line was nice. Sad, but nice.

I've been catching up on your last few posts, and I love the pictures of you and those of you & your husband. What a beautiful couple! I can only imagine how much you miss him.

I'm so glad things are looking up for you. Hang in there, Cara. Whether you know it or not, you are a very strong woman.