I'm still very busy with my future move, and this week I've been cleaning out closets and cabinets, discarding stuff no longer needed. What a chore! But at least I'll have less of that to do when I move.

I also got a great estimate from the neighbor in town who is a professional painter. I'll hire him to paint the entire interior of that house, which will make it nice and clean at the start. The couple living beside the house are from Slidell, Louisiana...decided to relocate here after losing their home to Hurricane Katrina. They have lots of horror tales to tell, and those are interesting personal versions too.

Last week when there was the awful hail storm here, I took the following picture that afternoon. It has one of those weird orbs in it, which appears to be hovering in the tree, or floating above the small barn. The sky was an eerie yellowish color, and that is what I was trying to capture in the photo. 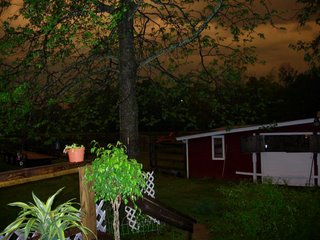 I hope I never see orbs in pictures I take at the house in town! Even though I'm not much superstitious, I can't help but wonder about all the orbs I've photographed around this farm -- even before we moved in. I wish the new owners good luck, but fear they might not have it here.
Posted by Cara at 7:28 PM 1 comment:

I'm in a rush this morning, since I have to meet a contractor at the house I'm buying in town near noon. Yes, I have found a great place to live: the house is about ten blocks from my other house in town, but in a better neighborhood. I got a real bargain too, since the house had just come on the market and being sold by the owners.

At any rate, I need to have some minor painting done, a few odds and ends on the interior (especially preparing a place for the cats at the back of the carport area). I have already put earnest money on it, and even IF something falls through with my current buyers of this farm, I still have enough money to go ahead with this buy/move and then put this farm on the market. Not that I think that will happen, but just in case.

The house exterior is literally maintaince free because it's brick. There's a fairly good-size chain-link fenced yard, which means there's enough space between other houses too. Here's a couple pictures: 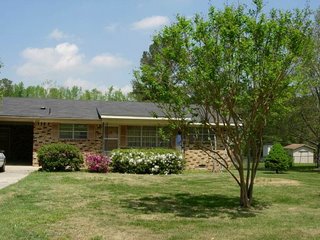 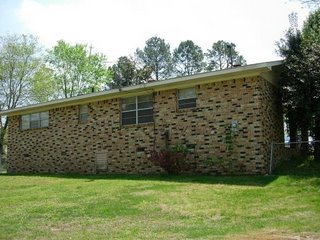 We had a furious hail storm last night, and I hope there was no damage to my roof on this house. I haven't inspected it, but the noise was deafening and seemed to go on forever. Lots of lightning and torrentail rain; we DID need the rain, because the pollen has been horrible. I'm just hoping there was no hail damage, though I did see quarter-size hail bouncing on the ground.

More when I have time -- if that ever happens!
Posted by Cara at 9:05 AM No comments:

First let me begin this entry by apologizing to anyone who reads my blog, because it's been a couple weeks since my last entry. My only excuse is that I've had several spells of depression, confusion, indecision and just didn't want to rehash those negative moods online. However, I'm feeling somewhat better tonight.

I signed some initial papers tonight for the sale of this place. While it may seem terribly quick, I know that DH would have wanted me to do that. The entire weekend before he died, he kept telling me I must sell this house/farm. Even though I reminded him that he still had treatments to undergo, and I couldn't possibly sell until all that was finished, he kept saying, "You have to sell, because you might get hurt there, and you'd be happier in town." Thus, I am in the process of doing what he wanted.

The man who rented my barn/pasture is involved, though it is his son and wife who actually got a mortgage on it. An appraiser from the bank had to inspect everything last week (certainly several days of scrubbing before THAT, as well as painting touchups and repainting the fence beside the house and the barn doors, etc)...but the eventual value was worth it. The couple have been approved for the loan, and the closing will be within ten-to-twenty days. I'll have 30 days after that to move, OR as long as I wish, since the couple are not in a hurry to move in. The couple also wants Festus and Ginger, so they'll get to remain here; the girl has already made fast friends with Ginger, giving her treats to win her trust. That makes me happy, knowing the little ponies will get to stay here and be treated well. Plus, the couple and the boy's parents (who rent the barn/pasture) will take good care of this place, and continue improvements -- like DH and I would have, had he not died.

I've looked at many houses in the past weeks, but haven't decided yet on any certain one. I don't plan to move back to the house I'm renting either, since there were problems there before. Mainly I need to find a house within the general neighborhood I like, in the right price range. I'm sure I will soon, because I have two already that are potentials. The older historic home is out of the question though, since it turned out to have serious electrical problems that would cost a small fortune to repair.

As for missing DH, it's like having a deep, painful wound in my heart -- all the time. It has been extremely difficult to make these life-changing decisions about this farm, since it was his dream to have a place for his horses. But it was also his last wish that I move, and I know he would be pleased I'm doing this. Still, emotionally it is painful to look around here and see so much of him (and myself) in everything; we put such hard work, a labor of love, into this old house and the land/barn. But I KNOW that the young couple will cherish it, and take good care of everything. DH would NOT have wanted it to sit here and little-by-little go downhill. So even though it hurts me to think of parting with it, I know I must do so.

Festus and Ginger are thriving, and whatever their shedding problems were, it has just about cleared up. I used a couple of remedies from the Tractor Supply store, and that seemed to have helped, in addition to keeping them brushed all the time. I'll surely miss them, but I can drop by after I move and see them too occasionally.

Of course, the crew of cats go with me -- wherever I end up! I never look at a house unless I see potential cat quarters! :-)

And with that, I'm outta here because it is late and I'm very tired.
Posted by Cara at 11:16 PM No comments:

I'm having a sad night, though the day was fairly nice. I finally received the life insurance from DH's employer, and the first of my monthly checks from his retirement. Yet each time I complete another aspect of the "paperwork" it just leaves me feeling lonely. Perhaps it feels as if DH is getting further and further away?

Other than talking to my sister this afternoon, it's been one of my first solitary days. Windy and warm, so I went on a long bike ride too. And then, I wrote this poem:

Spring air stirring sweetly
Scents of flowers aloft
As I sit quietly bereft
Remembering our past promises
To share our golden, olden years
And a well-deserved reward, retirement,
That vanished on a cold February morning.

You swiftly left on freedom's wings
A silent journey, a beckoning
Into an unknown realm of fate
Taken from me in a harsh moment
Loss of your breath forever.

Yet you are always near
So close, so real in memory,
Though we are seemingly apart
Our spirits are together somewhere
United on spring air stirring sweetly,
Rebirth on every flowering breeze.


When I went out to my sister's Saturday, I visited Harley. He was in their pasture briefly, before the first friend of DH's with a thousand dollars showed up to get him. Harley was not a thousand-dollar horse (not even registered), but so many friends of DH loved him, that was the only way to keep a feud from ruining their friendships. I love Harley, but I will probably never see him again. Even he looked sad to me that day, as if he misses DH too. 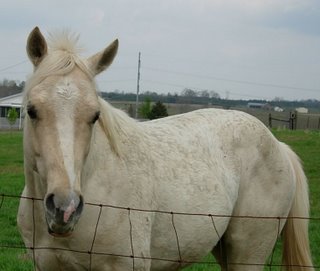