06/27/2006
Long time, no entry. It seems a million and one issues have kept me from writing in this journal, but perhaps it's only procrastination?

I'm in an ongoing battle with the air ambulance billing department and Blue Cross/Blue Shield regarding the helicopter ride for DH to a larger city hospital. This company doesn't have a contract with BC/BS and that means the insurance is delaying, stalling payment in any way possible. Instead of the company either waiting or doing something productive to get payment out of BC/BS, they are harrassing, threatening ME. This is a tactic I find unacceptable, and I swear that I will not rest until I've brought this issue to the public here in Alabama.

In the first place, the bill for a 20-minute helicopter medflight was $10,500.00!! That seems exorbitant, grossly excessive -- and it's no wonder the insurance wants to negotiate a lower price. IF I had no insurance, or the insurance had already paid, then I could understand the threatening letters/bills, the latest of which stated they would turn it over to a collection agency, but let's face it, I SHOULD NOT pay anything UNTIL the insurance has either paid or denied the claim. Frankly, it's easy to understand the insurance is delaying payment because the medflight company won't negotiate a contract. Hence, the medflight billing department try to put pressure on ME to MAKE BC/BS pay them. Excuuuuse me, but it's not as if I can do that; I've complied with everything the insurance has requested, even signed a release for DH's medical record from the hospital to be released to them.

I find the harrssement of a widow/family member in this situation, particularly when the patient died, to be nothing short of disgusting. I told the medflight company that, via phone call, and managed to get past the initial person to a supervisor, but no further. Today I wrote a letter to the director over the medflight program, explaining the situation and that he should look into how the billing department treats family member's of a deceased person. I'm just plain angry, and outraged. I suppose nothing short of writing an article about this abuse will ever appease me either.

I'm waiting for my sister and brother-in-law to show up and trim some of the trees near my house. A few are getting onto the roof, and will damage it. I also want the trees trimmed that line the driveway, because the bird's are ruining my car. I washed the car today, cleaned it inside and out; it sure looks better. That dirt road at the farm kept it dirty all the time.

And speaking of the farm, I made the mistake of driving by there last week. I am sure I did a double-take and stared open-mouthed when I saw what the young couple had done: they cut all those lovely Leland Cypress trees from the front yard. What on earth possessed them to do that? I'd pampered those trees from tiny shrubs to get them growing, looking so healthy and pretty. They made the place look "homey" and matched the landscape....accenting the green metal roof, and shutters. Plus, they helped cut down on the traffic noise. The place looks naked and ugly without them, just big stumps left there. Ugh. I guess I'd better not go by there again, if that is a sign of what might happen to the house. My stupidstition also tells me they'd better beware, that the house will never allow them to destroy it. Woe unto them if they do.

I spent the entire weekend finishing up what the "painter" didn't complete. I painted the top half of the bathroom, and the entire wallpapared border at the top of my bedroom. I was aching and sore all over, and my back is still giving me fits. One of my bedrooms still isn't floored, but I have quite a few things stored in there, unpacked. Eventually I will have that done though.

This weekend we're supposed to have a neighborhood yard sale here on this street, so I plan to put out some of the stuff I haven't gotten rid of yet. I did run an ad and sell all the extra furniture I didn't want to keep, and got a fair price for it.

I've been biking late every afternoon, around 7:00. It's great to ride in the streets again and in the park, so quiet here compared to the traffic noise of that farm.

My renter is moving at the end of August, so it looks like I'll be back in the "fixing up house" project again. Or I may just sell that place, and invest the money. I'm tiring of all the hard work involved in keeping up houses, although I sure do like the rental income. Oh well, I'll wait and see how I feel once she's gone.

Good news: One of my photos of the old outhouse made it into the finals of a photography contest! It will definitely be published in a coffeetable style book of photography, and I am in the process of looking at the proof and signing forms, etc. Unfortunately, my wonderful Nikon camera has developed a serious problem, and I can't take any more pictures with it. I fear the cost of having it repaired (it's no longer under warranty), would be more expensive than just buying another digital camera.

With that, I'm outta here for tonight. [I've been writing this on my laptop, and will post it later.]
Posted by Cara at 12:30 AM No comments:

I have been buried in "moving" details the last couple weeks, hence no entry. But I'm happy to report that I am settling into the house in town, though one room is still sitting full of unpacked boxes. I think I'm becoming a minimalist -- since I've trashed more "stuff" than some people own in a lifetime. However, the ordeal of the past few months has made me realize that "material things" are just that: THINGS. One can easily do without 90% of what we Americans acquire out of sheer brainwashing by ads to "have more and more"...even if not needed.

DH was a pack-rat, though he had motive in his madness. He would collect all sorts of stuff, then wait until someone came along who wanted just what he had. And he'd make money. I am the world's worst salesperson, and haven't attempted to make much money off the belongings I had to shed from the farm -- everything from equipment to unnecessary house furniture. My brother-in-law handled most of the selling, and has earned enough so that I can pay for what remodeling I had done on this place, even a bit extra. Yet there are some pieces of furniture still awaiting buyers.

I once remember reading that Ellen Gilchrist (one of my favorite authors) said that at times she'd had lots more money than she needed. And she'd given it away, kept only enough to have a roof over her head and enough money for day-to-day living. Because she said that too much money (and I will add, too much materialism) brings its own bad karma. Amen.

If nothing else, I have learned that I can live relatively well on a modest income, in a small, tidy house with simplicity in style and few personal possessions.

Every afternoon I go on a long bike ride along the quiet streets, and enjoy it immensely. I have even been back to the local park where I used to bike, and it seemed so much like "coming home" at last! The ring-neck doves still coo, and the pines and cedars still scent the air sharply. I LOVE being here!

There were complications, miserable moments (like the night before the move when my sister and I pulled an all-nighter cleaning this house to get it ready to move into), aggravations, financial setbacks and more...but all in all, I can say: "I AM home."
Posted by Cara at 10:41 PM No comments: 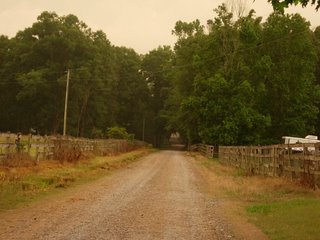 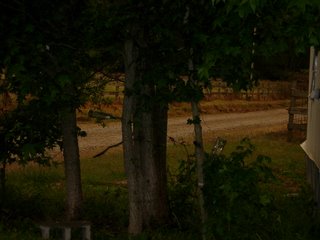 DH Started It, Maybe Too Late To Capture Bad Spirits? Many Southerners Once Believed Bottle Trees Caputured Evil Spirits Before They Could Do Harm
Posted by Cara at 8:48 PM No comments: