Not that all day has been rainy, but with intermittent rain showers and occasional burst burst of sunshine, it was mostly a day to stay indoors. Good for reflection and writing. Which I did earlier, but wanted to end the day with an updated blog post.

When I hear of others taking a vacation I feel somewhat sorry for them. Why? Because honestly my life has become an every day vacation...nothing that I can truly complain about. I do what I want when I want; I am financially secure, saving money; I am healthy (at least right now) and able to take care of my house, my yard, and, most importantly, my critters. I don't have to work, nor do I have to have a lot of forced involvement with others, including family. For me, this is HAPPINESS. I have no need to take a vacation and "get away from it all."

However, I am absolutely certain that at any moment anything unexpected can happen; I know from brutal experience how quickly life can turn into a nightmare. Therefore, I never take today, each moment, for granted; rather, I appreciate it all abundantly. If humans could only be happy today, this very moment, and realize that no matter how much they plan, the unexpected, unpredictable DOES happen, they'd live more fully in the moment and let their perilous plans fall by the wayside.

As for my life, I've been living as I always do lately: joyfully in the moment. I wish I could say this kind of life could be attainable with a lot of human interaction, but honestly, it's not. Human interaction brings about friction, anxiety, disagreement, misery and many times, violence and death. Only in solitude can the peace we all seek be found.

And now I'll end with this photo I took in early spring of my backyard trees: 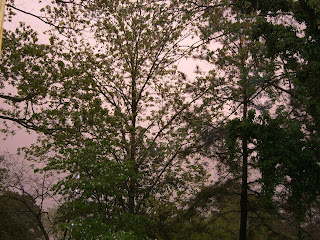 REMEMBER TO CHERISH TODAY & EACH MOMENT, IT WILL NEVER COME AGAIN....
Posted by Cara at 7:46 PM No comments:

Sometimes I feel a bit sorry for my two cats, since they are indoor critters. I used to take them out on a leash when I lived at my other house; since moving here, just haven't done that. Every night they sit in front of the doggie door that leads to the back porch/yard, sometimes poke at it, trying to get out. I treated them with Revolution a couple days ago, and felt it was time they got out to explore.

Late yesterday afternoon I let them out to roam in the fenced backyard. I stayed out there, walked around with them, then sat on the porch to watch them.

First they slunk around, sniffing, but all of sudden, both just began racing around, realizing they could run, run, run to their heart's content. Bitty ran up the wood fence, slunk along the top looking over it and all around other yards. Slinky never attempted the fence, but did run up a tree, then shot back down. Missed a pix of that, since she was too fast for me. However, when Bitty came back to the ground, she raced up a tree and paused -- at which time I snapped a picture.

This went on for over an hour, no attempt by either to leave the yard. I went in to get me a tall glass of ice tea, and of course, when I returned Bitty was gone! I figured she'd went over the fence, and called her - nothing. I thought she'd come back in time, so Slinky and I went into the house. When Bitty hadn't come back in an hour, I went out and walked along the fence, calling her. Finally heard her mewling at one corner of the fence, apparently in the yard next door. Coaxing her didn't help; she was stumped, didn't seem to know how to get back over the fence.

I had to go next door, ask for access to their chain link fenced yard, and find Bitty. She was crouched under a big corner bush, but came right to me when I saw her...at which point I put her atop the fence and she went down into my yard. By the time I got back to the yard, Bitty was sitting calmly on the back porch, looking at me as if to say, "What? You knew that would happen, didn't you?!" LOL

At any rate, I will probably be allowing them out a short time in the late afternoon, but ONLY with my supervision, keeping a close eye on them. 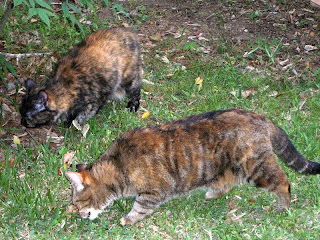 They spent a LOT of time doing this, sniffing and nibbling on grass 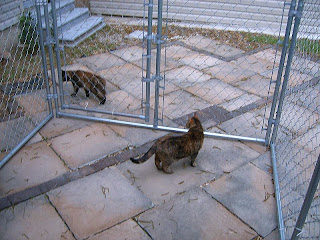 They also checked every inch of the yard, including the back porch, garage and dog kennel 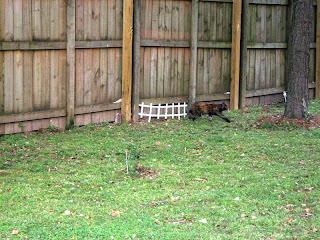 Slinky, preparing to race up a tree 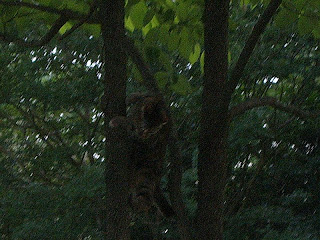 Bitty up a tree, photo not great... I was across the yard, and the focus/distance blurred it somewhat 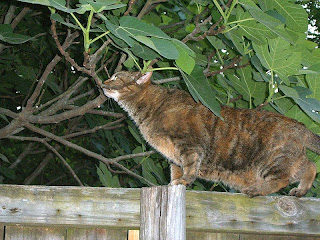 Bitty enjoying the neighbor's fig tree hanging over my fence 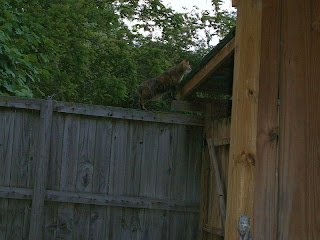 Bitty looking at top of the carport: "Hey, I see a street, more houses and wait! Oh no, stray cats!!!" 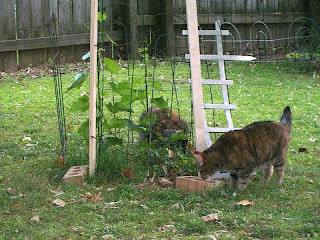 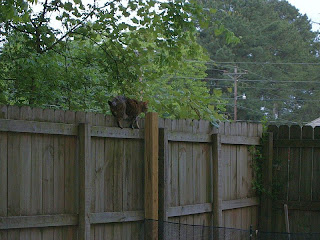 Bitty heading to the corner of fence where she apparently went over later; I found her on the other side under a corner bush 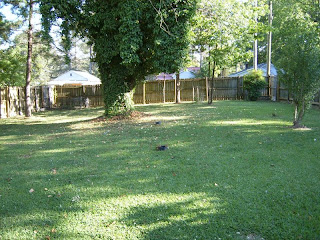 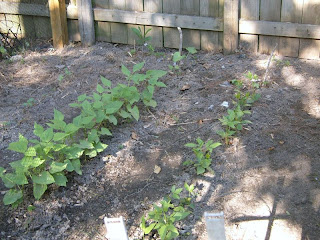 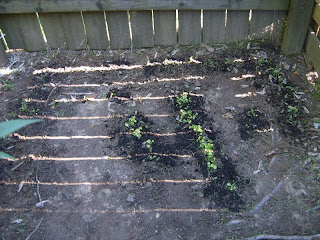 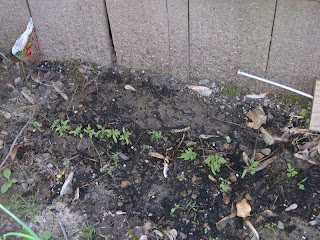 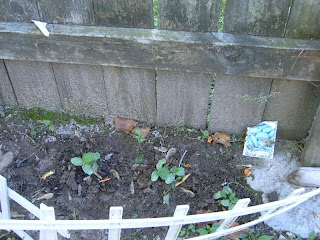 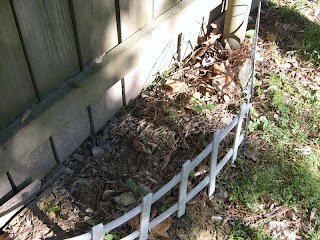 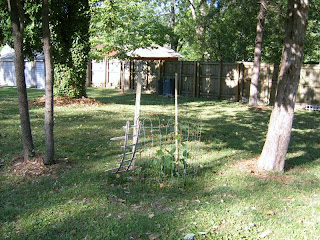 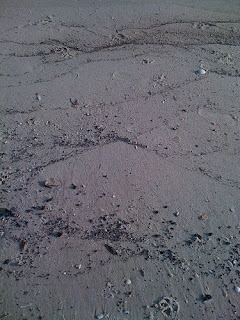 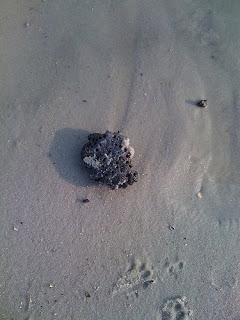 Lately, a neighborhood cat has taken to following me around. I assume it is owned by someone, although the cat eats at my stray cat feeder. However, she is very lovable, enjoys being petted, obviously tame. In other words, she is not feral like some of the strays in the neighborhood.

I've started calling her GoldieLocks...or Goldie as a nickname. After the dogs retire to their crates for the night, I allow her inside my fenced backyard to follow me around, sometimes sit in my lap while I'm on the deck/porch.

Sitting on the patio 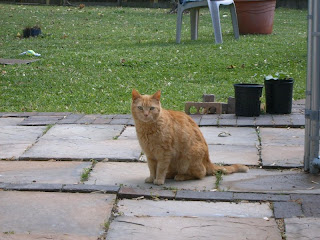 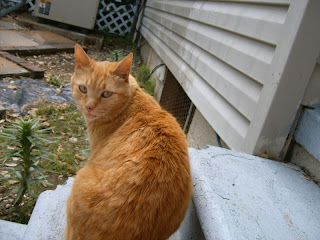 On the back steps leading off the sun porch where two my cats live. Slinky made her displeasure known by warning yowls and hisses -- she definitely does not want another cat, since she's had to battle Bitty Kitty for equal rights!

The tragedy in the Gulf is truly heart-breaking. I don't know if I can bear to look at the oil-drenched birds sure to appear on the news soon as that oil hits the wildlife all along the coast. What a horrible, horrible eco-disaster, makes me sick and depressed about the future of human beings. We have such a way of fouling our own nests -- probably at some point in time creating our own extinction. Sad.

Friday I liberated myself from something - which I don't want to discuss. Just wanted to make this note for myself to remember when I need to reference the date: April 30, 2010.

Another stormy day predicted, overcast and heavy humidity. The 'feeling' outside is a prelude to tornadoes, hope none do any damage.

And with that, I'm outta here for today.
Posted by Cara at 11:50 AM No comments: