I was sick, some kind of stomach virus, for most of last week. In fact, Thursday and Friday I didn't see the news. When I did turn on the TV Friday night, all heck was breaking loose; the hunt was narrowing for the boy/boys responsible for that marathon bombing. Sad. They did get one of them alive, so maybe the LE officers can find out why that happened.

I felt better Saturday, but only got down a little food. Today I was more like myself, and even managed to take all three dogs for a neighborhood walk. I'm proud to say that Muffin walked faster than my other two; she's definitely good for walks!

A little history on Muffin -- one of my neighbors found her and her brother pup in a box on the side of the road! She rescued them, gave the other pup to a friend and kept Muffin. They apparently didn't have the time to house-train her, and ended up just making her stay outside. I'd seen her many times on my walks, and my grand-niece said they wanted to give her away. For one thing, neighbor boys were picking on her and she was getting snappy, and would soon cost to get spayed. Their two girls had grown tired of her (sigh)...and well, frankly, she was just too much trouble for them. So when my grand-niece said they wanted to give her away, I said I wanted her. Alas, too often that is the story of people who won't/can't take care of a dog.

I had NO trouble house-training her -- just showed her the doggy door, and she watched my two go through it which she imitated. Just that easy.

Unfortunately last Wednesday, Rambo jumped on her and she screamed like she was dying. I was in the yard, scared me to death, but he didn't hurt her--just rolled her around. I have no idea why he all of a sudden decided to put the smack down on her, unless he thought she didn't understand he's alpha dog. He got a whipping/stern scolding though (didn't hurt him, but he KNEW he'd crossed a line!). At any rate, Muffin was a bit standoffish and nervous for a day or so, but is now back to her usual frisky self. She has NEVER tried to challenge or dominate Rambo or Oscar, so I just don't understand the altercation.

In other news, I attended a seminar about estate planning last week; it was interesting and informative. Tomorrow I plan to call for an appointment with the lawyer who specializes in estate planning. I have a Will, but have decided to make some minor changes, as well as look into trusts.

The weather has been hot/cold, hot/cold...but that hasn't stopped the grass from growing!

I'm loving my Kindle, and have it loaded with a ton of e-books. I'm also still editing/proofing my remaining novels to get online at Amazon as soon as possible.

And now for some pictures! 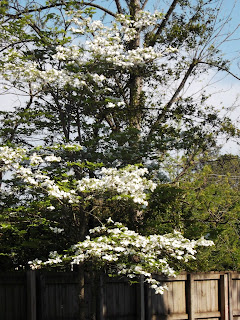 My dogwood in full bloom 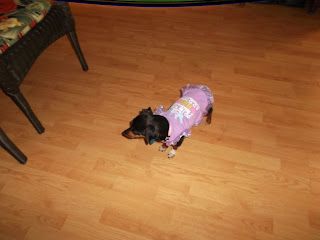 Muffin in her outfit, which says: Princess has arrived! 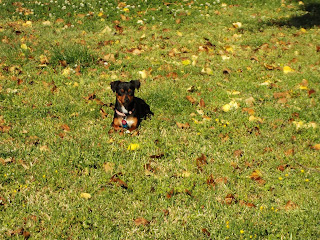 Muffin in the backyard today 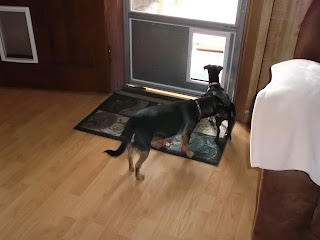 Muffin & Rambo, doing what dogs do!

In the last photo, it's easy to see how much larger Rambo is than Muffin. I took her to the vet a couple weeks ago and she weighs 7 lbs. I could hardly believe it because she is so tiny. However, I plan to have her spayed in a few weeks; I wanted her to be adjusted here before putting her through that and maybe stressed out. That is partly why I was so angry/upset at Rambo since she'd been doing well, even beginning to be playful...till he pulled that stunt. Oh well.

With that, I'm outta here for now.