The conflict I've always faced with my mother is that I feel torn between feeling sorry for her and anger at her past neglect/abuse. She is getting old, in failing health (serious, under Hospice care) and when I am with her, I feel compassion. Yet I also recall all the pain and horror of our childhood when she WOULD NOT get us out of that dangerous situation. And she could have, in one way or another. Living with a raging, violent alcoholic father, our mother always chose either her own safety or staying with him over her children. I cannot and will NOT forgive her for that. Ever.

As the eldest child, it was I who intervened and tried to save my younger sisters. So many, many times I can't even recall all those dark events. We were in serious danger of being killed by my father, on numerous occasions, and I've always wondered why it seems to be acceptable (for society/religion) to forgive parents who might kill us moreso than those dangerous strangers who might do so. We seek the death penalty for killers, and the fact that potential killers are your parents has no bearing on this fact in my mind. The simple answer is that a child needs to feel loved, no matter if the reality is that they ARE NOT loved -- at least NOT in a safe, protective way.

So that may be my ultimate conflict: That I cannot feel loved by my mother (nor father who died years ago), and cannot forgive them because of the abuse/neglect and lack of protective parenting.

Yes, we as a society are MORE aware of child abuse now than in the past. And Yes, there is progress in that more abusive parents/killers are held accountable for their actions. Still, there is no way to ever heal the wounds of a damaged child -- and no way to resurrect the dead children.

As I've grown older, and mother has to, I've found that all the grievances I had for her have come back to haunt me. I cannot look at her and NOT see all the pain she inflicted upon us children -- which only invokes fury. Mostly, I cannot bear to be near her any longer, and I have this awful premonition that I will not even attend her funeral.

In this photo below, she is standing at my step-dad's grave. She started dating him shortly after our dad died, and while my three younger sisters were still in high school. Instead of taking care of them, she was always on the phone with him, off on an outing, while my husband and I took care of the girls. You see, she had many opportunities to correct her selfish behavior, but she never did. It was always ALL ABOUT HER. And to this day, it's the same: She is living with one of my sisters after my step-dad's death (instead of going into the nursing home which would be paid for by medicaid since she had NOTHING after his death)...and causing all kinds of problems. In fact, today I learned that my sister's husband (with whom she is living) is having health problems, probably stress-related.

Mother has always thought that her children should take care of HER, instead of HER taking care of them -- from our births. Draw your own conclusions. 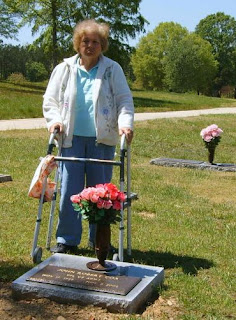