I located the Hamricks' gravesite (early owners of the original 40 acres of land) yesterday afternoon on my bike ride. It was another one of those almost eerie occurrances. I had passed their grave lots of times, and it was near the path where I ride...but yesterday, as I went by, I glanced in that direction and lo, I saw the name on the headstone. I stopped immediately -- though I'd found several other Hamrick graves, none were the right ones -- and had a feeling this was the ONE. Sure enough, on the footstones were engraved the exact names I was searching for. Additonally, there was an unknown lady's grave on the other side of the man. Looked like after his first wife died, he married this lady, and he was buried between them! At any rate, I will try to get some pictures this afternoon to post.

Oh, the reason I hadn't noticed this Hamrick grave is because there was a HUGE clip-on flower arrangement on the headstone. It had come off, and I realized that when I was looking at it, so I picked it up and put it back on. The thing fit VERY TIGHTLY, so the wind could NOT have knocked it off. I had the strangest feeling then, as if the Hamrick's were saying to me: "Here we are, stupid!" Yeah, I guess my overactive imagination DOES get the best of me sometimes!

Now I only have two more couples' graves to find, in order complete birth/death dates of all those who owned this land prior to the house being built. There's still one large corner of the old cemetery to explore on foot, and maybe if the heat isn't too bad this afternoon, I'll do that.

Today promises to be busy here; we're stripping the garage and wash-house. DH has a small pressure washer that does the job quicker, and he's using that. Once the buildings are dry, he'll start painting; using the spray painter sures does make the job go faster. Next week we'll have two loads of gravel brought for the driveway at the back of the house, where we put the carport. So we need to kill the grass there today and then put down thick plastic for the gravel.

Once those tasks are finished, we have only TWO major tasks to finish: a new roof and painting the alumnium siding white. DH talked to a roofer the other day, and he will come out soon to give us an estimate. We want a green roof (either metal or shingle) and that should truly improve the appearance of everything, make it all come together -- at last. BUT if we get that all finished before Oct. 12th of this year...well, we will have accomplished an almost miraculous feat of renovating this whole place in ONE YEAR!

When all this is completed, I plan to write the one remaining heir of the original owners of this house (a grandson, age 59, who lives in a nearby large city) and explain how we've renovated the house, and ask if he'd like to see it. And if he has any old photos of the house when first built, any memories of visiting here (he is the ONLY grandson) and other information about the place he'd like to pass along. Perhaps he can tell me a little about his maternal grandparents who built the house, for I'd like to know something about them personally, and their lives. I already have a rough draft of the letter I'll send (his name/address was in the deed, and I checked it out via the internet, and he still lives there) to his home, providing my email address and phone number. I think this would provide invaluable information for future owners...particularly when I create a "time capsule" to leave within the walls or attic somewhere.

Another project for late fall is building a large barn about halfway between the old small barn and the back of the pasture, get it away from the house somewhat. DH had a contractor who builds metal barns to come out and do an estimate; he asked $14,000.00 to build what DH wants, which to say the least, was RIDICULOUS. DH has begun buying good but used metal from chicken houses torn down in this area (excellent material, since it only has minor hail damage that insurance replaced) and figures he'll only have, at most, around $4,000.00 in the barn if he builds it himself. We have even toyed with the idea of stabling horses (for rent) when it's finished, but haven't decided yet on that. Regardless though, when the barn is done, it WILL add $14,000.00 value to the overall resell value.

It's nice to have the large rental fee from our house in town rolling in like clockwork each month. We were very lucky to find such great renters; they pay ahead of time, AND take excellent care of our place there.

One thing I've noticed on my bike rides in two vastly different nearby subdivisions: a blue-collar subdivision is always brimming with activity, people out in their yards, kids riding their bikes, friendly hellos everywhere I ride. But in a very upscale subdivision (homes around $500,000.00 value) where I ride occasionally, there is NEVER anyone outside, and if they are, they never speak as I pass by. I find that revealing about the "difference" between lower middle-class folks and -- as my grandmother would say -- "high-faluting" upper middle-class people!

Gotta get going. Have LOTS to do today. {Still working on novel research/note-taking and plotting when time permits too.}

It's around 8:00 now, and I've just returned from my bike ride. I did get some pictures of the Hamrick graves, and will post them below.

I was thinking today about my description of the blue-collar neighborhood..and how it reminded me of Anne Tyler's novel, The Accidental Tourist.If you haven't read that, it is a very good novel! 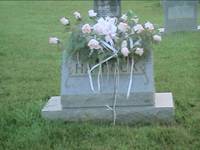 Why I couldn't see the name... 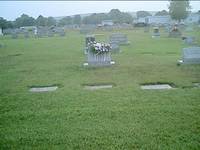 Tombstone with man in center of the two wives