I stayed up verrry late last night, finished reading the novel, "Middle Ages." It was delightful, and apparently absorbing enough that I HAD to finish it. Been a long time since I couldn't put down a good novel. Somehow I feel I'm about to get back into my own writing, as well as obsessed with reading again. And as Martha Stewart would say, "It's a good thing!"

I spent all morning cleaning, rearranging on the cat's porch, quite a task. It is not quite as difficult to keep their quarters clean in their new abode, but does need a once-monthly thorough cleaning/mopping/etc. Nice and cool out there with the small air conditioner, but the two outside cats are underneath the back porch where it's cooler. Last time I checked it was around 95 outside, and sweltering, blistering heat that hits you like a fist when you open the door! Horrid, horrid.

I knew my great-grandfather only when he was aged, probably in his late 80s, and quite a character. He lived with my grandparents briefly, and my daddy used to say that every morning the old gent would awaken him at dawn by poking a walking stick in his side, and yelling, "Get up, time to rise and shine, can't lay about in the bed all day, son." That didn't endear him to my daddy at all!

My grandmother never liked him, and when he left there, he went to a nursing home -- where it was rumored he chased all the young lady caregivers and even the elderly women, trying to romance them. Hey, he WAS a character! 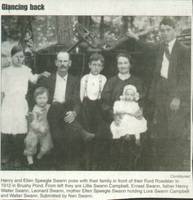 My great-great grandfather/mother with grandfather and siblings in front of a Ford Roadster, circa 1912

And here's a picture I took the other day, after a rain shower. The two outside cats got on the motorcycle seats, since it was dry and cool under the carport. They look ready to hit the road! 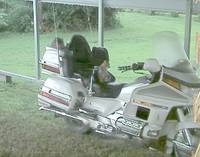 City Kitty and Bitty Kitty ready to take a spin on motorcycle! :-)