I have some new photos of the kitten, and my other cats. Kitten has grown so much, and is NEVER completely still (unless sleeping!), so I had a difficult time getting pictures of her. My other indoor cats are thriving also, and I wanted to post a few new photos of them as well. All pictures will be at the end of this post.

This past weekend DH and I didn't get as much accomplished as we thought we would. We got most of the garage paint stripped, just need to do one small section of the back -- if it doesn't rain tonight. Saturday we had to make a trip to the building supply, get some lumber to replace the rotted or missing planks on the two outdoor buildings. And we bought some high-grade, thick plastic to put down for our new driveway/carport, putting out weed/grass killer there first. Hopefully we can get the two loads of gravel delivered either near the end of this week, or early next week.

We also had to make an unexpected trip to Wal-mart on Saturday; the small air-conditioner on the cat porch quit. It was very old, so I can't complain, and the new one only cost about $75.00 since it is only for one room. Lately it's just been terribly hot and sweltering and the cats can't survive in that sunroom without air conditioning; it is not part of the central heat/air for our house.

Sunday we went on our usual drive, taking a break until late afternoon. However, by the time we got home thunderclouds were on the horizon and before we could do any more work, it started storming. Buckets and buckets of rain, thunder, lightning and it didn't let up till after dark. Monday the same thing, so that makes TWO afternoons I've not been able to go on my bike ride. But hopefully today I can, since it looks like the clouds are moving out, and the sun is about to shine. It was foggy, with a slow drizzle all morning, but improving now at 2:30.

I've been doing more research/note-taking for my work-in-progress (novel), as well as reading fiction when I have time. I'm really enjoying the Thomas Cook and Ruth Rendell novels I ordered from Amazon.com.

I was thinking this morning (while doing housework) that the two houses we own are, in some ways, similar versions of my childhood homes. My parents lived in town, and though the house DH and I own there is better by far than where I grew up, it IS in a nearby neighborhood. And this house we own in the country is similar to my grandparents' old farmhouse. I suppose I should be very content, satisfied and happy...since we've managed to own (both paid for) two homes that are similar to houses I lived in as a child. In many ways, I am grateful/thankful for having managed to do this, because in large part, it has been due to living frugal and carefully, good planning, and of course, a bit of luck. I don't think we'd sell either one unless absolutely in dire need of money -- and that I foresee ONLY as some sort of major medical expenses. {BTW, DH got the results of his medical tests, and they were fine!} But I digress...

I spent some time this morning tinkering with my website, The Prose Menagerie. I noticed that one of my novels, "The Secret of Cry-baby Hollow," and my website were voted by readers as top favorites at Bitbooks.com, and I was entitled to a blue ribbon

graphic for those. So I updated the site with this new award, and did a few other necessary tasks.

Now to end on an upbeat note, I'm going to post some excerpts by Maurice Hall I found so very true:

If you woke up this morning with more health than illness, you are more fortunate than the million who will not survive this week.
If you have never experienced the danger of battle, the loneliness of imprisonment, the agony of torture, or the pangs of starvation, you are ahead of 500 million people in the world.

If you have food in the refrigerator, clothes on your back, a roof over your head and a place to sleep, you are richer than 75% of this world.

If you have money in the bank, in your wallet, and spare change in a dish someplace, you are among the top 8% of the world's wealthy.

If your parents are still married and alive, you are very rare, even in the United States.

If you can hold someone's hand, hug them, or even touch them on the shoulder, you are fortunate.

If you can read this message, you are more fortunate than over two million people in the world who cannot read anything at all.

And yet, we Americans still gripe and whine about insignificant matters. No wonder most of the world thinks we're selfish, self-centered and arrogant/spoiled! 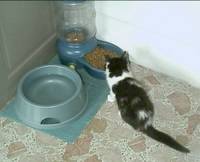 Kitten eating -- her favoite thing to do!