We all had a GREAT time. Unfortunately, Oscar whined nearly the entire drive to Huntsville. We went to visit my mother first at the assisted living place, which was 20 miles east. He still remembers her, since Oscar was my step-dad's dog. I walked him around the building twice, thought he'd settled down on our drive...but no luck. Rambo, as usual, was just fine; he travels well. Very quiet, never barks, never whines...just lies there looking satisfied. Oscar, on the other hand, has become the problem "child" er, I mean "dog." LOL

At any rate, once we arrived at my sister's house, all was well. Both dogs settled in and seemed to enjoy themselves. We went on long walks, they had "no accidents" inside the house (even though there was no doggie door for constant access) and romped in the backyard when I let them out. Since the food was plentiful, they stuffed themselves on treats dropped from the table as we ate (but never barked or whined, just sat there waiting and looking expectantly!)

My sister took me shopping one day, then we watched a rented movie and ate out twice. They were planning on cooking out one night, but it started raining and that curtailed their plans.

Most important of all, we visited a bike shop and look what I bought: 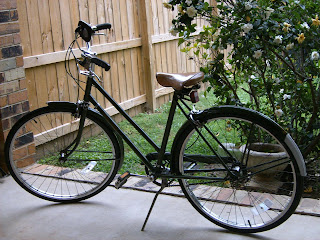 A 3-speed 1974 Raleigh bicycle made in Nottingham England!

And yes, it IS authentic, in good shape and I have been out riding it two days already! I LOVE it, but also, it is a rare find and "collector's item." That means it will only go up in value, not down. I almost want to store it in the house since I realize how rare it is...especially with all the authentic gears, brakes, etc. intact. At least it will never be subject to bad weather, since I have it in a dry place.

Something funny with the dogs: Oscar and Rambo slept in their crate in the bedroom with me while I was there. The second night it came a terrible thunderstorm and Rambo woke me up whining -- he was SO scared. So I let him sleep in the bed with me for the remainder of the night!

And one other thing: My brother-in-law grabbed my sis from behind her back for a BIG hug and both dogs started barking, lunging toward him as if they would attack. It was funny and surprising...but I guess I know what they'd do if a male attacked me!

Here's some photos of our time at my sister's house: 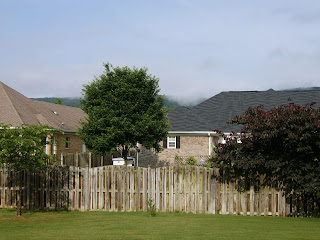 Morning mist over the mountain range behind their house

I have more pictures, but apparently Blogger is having technical problems so I'll add those later.

In the meantime, I was shocked (like most people) to learn of Tim Russert's death due to a sudden heart attack. Reading about his situation though, I realized that the cholesterol will get you in the end. He was even on medication, but that didn't prevent his sudden heart attack. I think DH would have died from a similar heart attack even without the complication of acute leukemia... The thing is folks, eating that high fat diet will come back to bite you in the @ss sooner or later -- even with medication. Read about Russert's case, if you have doubts.

More later, when blogger is working better.
Posted by Cara at 5:24 PM