Whew, that was fast, huh?

I always plan to keep it longer, but someone always appears who wants it soon. This time, the lawyer across the street recommended a middle-age married couple who have no children. The man's boys do visit once a month; the woman's grandchildren occasionally visit. The man is very handy around the house, and the woman LOVES gardening/yard work! They looked like ideal renters, but time will tell.

So far, they've finished up the few tasks I didn't have to use the handyman for. The woman has planted flowers (from her parents' greenhouse in the yard, done minor landscaping!) and I knocked $200.00 off the deposit for their help. They already have the power in their name, and are moving in some things, but won't live there until the first of June. They signed a year's lease, so I'm hoping I won't have to deal with rental issues/moving, etc. for at least that length of time. Both said they hope to stay was long as possible, maybe even buy the house from me eventually.

I did hire a handyman for several tasks, took down old shower doors, built a new fence gate on the backyard fence. I painted outside some, redid the foundation paint, etc.

Here's some recent photos of the rental house, where DH and I lived over 20 years: 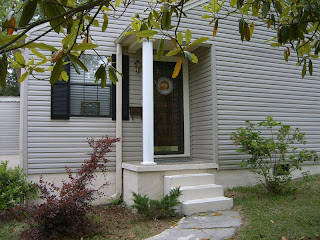 The front entry, lots of big trees in the yard but the size is deceptive because the rear of the house has a huge addition with den/backporch; there's also two paved driveways, and a detached garage 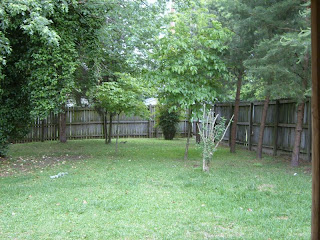 Everyone LOVES this large fenced backyard with big trees!

In the meantime, I had a heart-wrenching situation develop over the weekend: Next door elderly neighbor lady discovered a mom cat had given birth to four kittens in the shrubbery in front of her house. Apparently all the kittens left except for one, which got caught in a fierce storm Friday night...and was apparently starving, yowling and keeping the lady awake. She came over here in tears, begging me to try and catch it. Long story short, I did. And the kitten, cute and healthy-looking, was feral of course. I got it in a carrier, then put it in a large crate with litter/food/water and it started eating non-stop. Eventually I was able to touch and pet it, but if I took it out of the crate, it panicked and starting squirming to get away.

Once I got a good look at it, it appeared the pads of all four paws were raw looking. On closer inspection, it looked like they had been burnt ... and I thought that very odd. But then it occurred to me that if the kitten had been near lightning or was wet and touched something electrical, it would have burned it's feet. That was the only explanation I could figure out for such an odd problem. However, it was healing fine and with a bit of care, I'm sure it'd be okay.

But, I have four ailing cats, just spent $348.00 on one cat who had to have a tooth pulled. Plus, another cat, Bob, has really been sick the past few days; I have an appointment for him at the vet this afternoon, and I'm not hopeful he can be helped. He's been going through these spells of eating ravenously, then throwing up and diarrhea for a year or so. Every time he pulls through, but this time, I don't think he's going to. He's skinny as a rail, and just has that staring look in his eyes that I've seen before. At any rate, I fear he has leukemia; several of my cats have had it, and that's the main reason I couldn't keep the kitten. I couldn't expose it to that, and risk that kind of sorrow again. I promised myself I'd not have another kitten/cat till all these were gone, and I made sure nothing remained here to expose them to that disease.

So I took the kitten to the animal rescue people today, and maybe they'll find it a home. I hope so anyway. The FOCUS group usually takes kittens; CAAWA (the other rescue group) takes dogs mostly, as fosters and then tries to adopt them out.

I just wish people would SPAY/NEUTER their pets. The mom cat has been living at the house across the street, where a woman feeds/pets her, but claims she can't capture her. Bunk! If I can capture a wild, feral, scared kitten, that woman can lure the mom cat into a safe-trap. Oh well, what are you going to do?

I'll end on that sad note, since it's nearly time to take Bob to the vet.

(P.S. My cats got leukemia virus from a stray I took in and didn't get tested at first. ALWAYS keep strays separate from your other pets till vet checked!)
Posted by Cara at 2:46 PM

Oh, I'm so sorry to hear about your sick cat. And I fully agree about the spay/neuter thing. It drives me completely insane that people let their pets run around getting pregnant/impregnating other animals.

The kitten was unlucky in many ways, but fortunate to have encountered you.