Friday was my first day, of course, and it was a bit overwhelming! First off, the QuarkXPress/NewsEditPro IQue programs for editing/designing newspaper pages runs on Apple iMac! I've never used a Mac in my life, and though similar to Microsoft PC features, there's some differences in keys, etc. That will take time to be comfortably familiar with, as well as learning the tools in the IQue programs.

I did sort through some ad sheets for an upcoming special, helped other editorial staff do write-ups for that feature. Basically that consists of condensing three pages of information to about 4 or 5 paragraphs of writing. Fun, yep! There will be quite a bit of this type material to do in my position.

I had written a column for Sunday's newspaper, about my step-dad and it came out today. I thought honoring a good step-dad would be a little different than the usual biological father material for Father's Day. My mother called, had read it, and just loved it, said I "captured" step-dad's personality perfectly. Nice to know.

Yesterday I worked all afternoon, helping proof/edit the front page and hard news features. Wrote brief headers, some headlines, etc. Stayed completely and utterly absorbed, which is what I LOVE about working in a news room. You literally cannot worry/fret about life, since the activity level and concentration keep you completely occupied. I also observed the news editor designing pages, explaining various features/tools of the IQue program, and brought home several technical books I've been wading through slowly.

I like everyone I've met there, so far. Two women will be helping me with Lifestyle sections, and we also use freelancers. That is great, because I have a packet of notes about story ideas for Lifestyle, and can sometimes assign these to freelancers and/or other reporters. I would like to have a full-time reporter working just for Lifestyle, but that probably won't happen until after July 8th, when our new managing editor arrives.

Since I am on salary, my hours are flexible. So long as I get the work done, I can arrive/depart when I wish. I'll have two major week-day deadlines, and if I can stay ahead of those, it should be easier. Nothing like trying to deal with daily hard news deadlines, which can be exhausting. When I did copy editing, NOTHING went to press before I looked it over. That meant sometimes I didn't leave the building till around midnight. I don't mind working past 8:00 but don't think I'd like staying much later.

Tomorrow morning I have medical tests scheduled for daybreak at the outpatient center. Doctor wants an ultra-sound to see if my gall-bladder might be causing this constant acid reflux. My stomach has improved over the past two days, since I quit drinking so much skim milk. I read an article that stated even skim milk has a kind of protein that can cause stomach irritation. And I was drinking a lot, since it first soothed my stomach -- but noticed it rebounded, and got worse. We'll see, I guess; just glad it's not hurting as much.

Next Sunday afternoon we're all having a "company picnic" at a nearby lake. Should be interesting, and I only have to bring plastic plates/glasses.

Rambo has a case of "separation anxiety." Poor fellow, he followed me everywhere when I came home the first day, whining, giving me reproachful looks. I'm trying to adapt them to another routine, and even let them mingle with the cats last night. No incidents, though the cats hissed and growled. Oscar went out the cat-door onto their porch, and when he didn't come back, I looked out to find him eating the cats' food! It is Iams, and he sure was thirsty later. He seemed to like being out there, but the cats were aggravated; I'd never leave them together when I'm gone. But they all need to learn to get along at night, so I can spend time with ALL of them in the evenings. I'll be gone most of the day, and I know Rambo and Oscar will need more attention at night. I do take them on a walk soon as I get home in the afternoon. And they still love it. I'll end with this recent photo of Rambo: 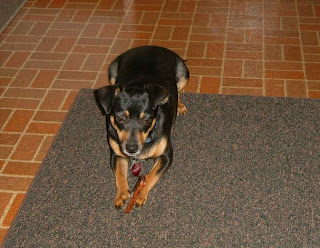