Late yesterday afternoon I lost internet/cable for a couple hours, and it was no big deal. I went out on the back porch, watched my indoor cats enjoying the outdoors. Two of the outside cats, Mister Mister and Sore Paw, ventured over the fence, and though all four never got close to each other, they sniffed around and eyed each other warily. Interesting. I also read a novel; the weather has cooled down, pleasant.

And now for the photos I've taken. Most of these are on my street, around my house, and close neighbors. When I walked the dogs yesterday, I realized all streets are nearly cleared, tarps on houses, etc. Maybe today or tomorrow I can take my camera and walk the same route I photographed last year - do a side-by-side comparison for my blog.

Click on any of these to enlarge, captions beneath pictures. 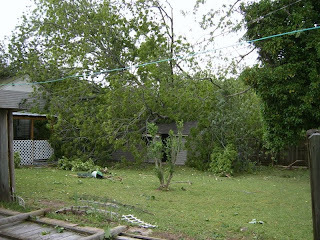 This is the back of my house. You can see clearly how the huge pecan trees fell over my house and caved in the garage roof. Due to the garage being cement-block under the siding, it has no structural damage. 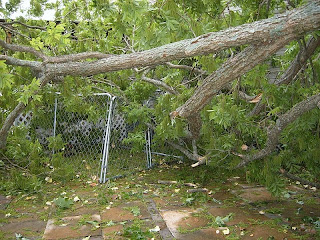 The dog kennel beside my back porch was crushed in places, but blocked enough that the dogs could actually use it sometimes for their "business." I could dodge and crawl around under the tree limbs to get inside the gate, clean up their mess. Had the porch/kennel not been spared, the dogs wouldn't have been able to go out of the house - a nightmare I don't wish to dwell on! 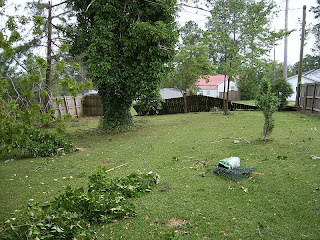 My fence damage, sections on the ground, some of it leaning. 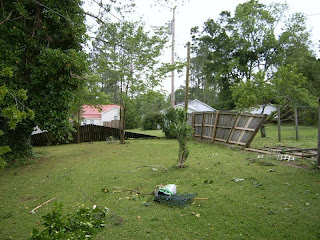 Another view of downed fencing 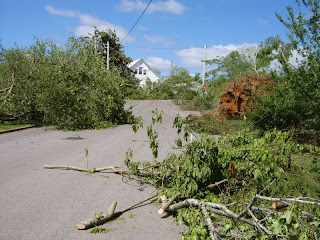 The next morning after tornado as I was walked up the street - you can see all the downed trees; further along, tree trunks blocked the street entirely. It took several days before it was cleared enough to get through. 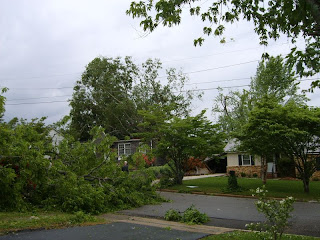 Brick house across the street; a massive tree fell right through the center of that house. The lady was home, in the next room -- said she heard the loud boom when it hit the house, then creaking, groaning, snapping, popping as the tree tore up the house. It demolished the front of her house, don't know if it can be repaired. But she's still staying in the back of the house; it took five days to get the tree cut/removed and a crane was used, as well as front-end loader. Quite a job! 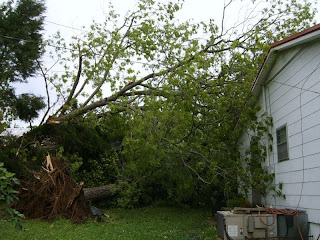 Neighbor's house on west-side of me - huge black walnut tree fell into the back of it. Some has been removed off the roof, but the rest is still there. 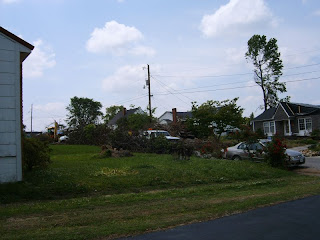 View from my yard looking up the street this week when street workers were loading up debris, a look at how high the piles had become! 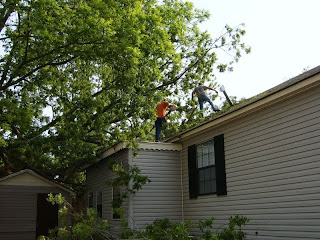 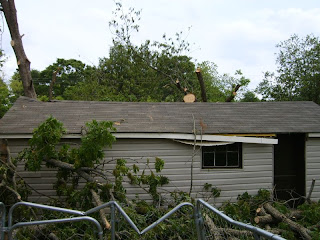 Garage after tree was removed. The entire roof will have to be replaced, some decking and the main beam, which was broken. I have a tarp on it now. 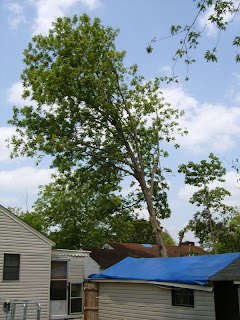 This is the leaning tree. It's on the neighbor's property so I can't cut it. There's a squirrel nest in it, and the babies come down...they are big enough to leave the nest now, in case it does get cut. What concerns me is that if that tree falls toward my house, it will hit my bedroom roof and possibly destroy the cat's porch (the small metal-roofed extension by the garage). 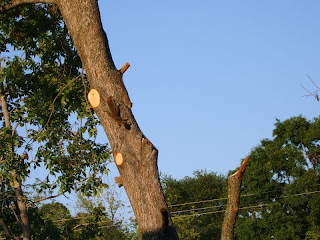 Baby squirrels venturing down the leaning tree. They get on the garage tarp, scamper around. I put some pecans out there one day, and they got them! 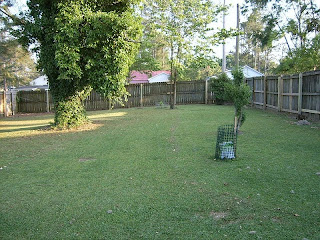 Fence damage repaired. LOVE my back yard, and notice, the vine-covered tree is fine! That's Bitty Kitty sniffing around beside the fence one afternoon. 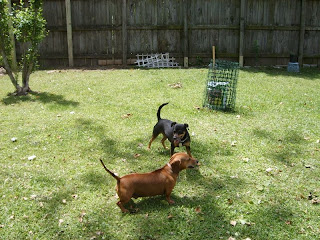 Happy pups playing in the yard. Rambo did about five fast laps around the yard, he loves to run. He'll tuck his head and tail down and just fly! I said I should take him to the track! (smile) Oscar usually doesn't run much, but he did the first day out in the yard - and then they started a wrestling match, then chased each other.

I'll try to have photos of the neighborhood damage soon. I didn't want to take pictures while crews were out working or people searching for stuff in the rubble. Overall, it pretty much looks like ALL areas after a tornado - almost all such scenes look like a bomb was dropped. Sad.

Thanks for the pictures! By the way, I was the same way after 9/11, researching all the various disaster preparedness items I needed. Once you decide and buy everything post about it. We can compare notes!

Thanks for a nice share you have given to us with such an large collection of information. Great work you have done by sharing them to all. simply superb. Photo Recovery

A great post without any doubt. The information shared is of top quality which has to get appreciated at all levels. Well done keep up the good work.
http://dogtrainingproductreview.com/

A great post without any doubt. The information shared is of top quality which has to get appreciated at all levels.
Well done keep up the good work.