First, I'm not complaining. At least the loud noises are due to clean-up crews and on-going efforts to clear tons of debris from the streets. However, it is difficult to get accustomed to, since this was a quiet neighborhood, very little traffic.

Our city contracted with FEMA/Army Corp of Engineers to assist with debris removal, and the huge trucks started routes over the weekend. Many of the massive tree trunks were simply too large for our street department to handle. In addition, for several weeks, the FEMA/Army Corp trucks will be provided at no cost to the city. I'm very glad for their involvement, and so should everyone be in this city/county.

Every day I think the chainsaws will stop, but every day there are some going somewhere. Today there's a couple going behind my house, a fallen tree that is just now getting cut.

Fortunately the work crew I hired finished all my repairs yesterday, roofing and debris removal. I gave them a bonus, because they showed up soon and did my fencing, as well as my roof work for a low price. I have hired them before, and I know they are trustworthy - will use them any time I have maintenance and/or repair issues.

This morning I ran errands in town, then decided to mow my front yard since it was cool. Really quite nice outside, and the mowing went quickly. Tomorrow I'll mow the back yard. Still haven't decided if I'll hire the guy next-door to mow my lawn -- maybe only when it's too hot for me to mow.

Tomorrow I have hired him to help me clean out the garage and hose down the cats' sun porch. Quite a job! I could do it by myself, except for the lifting/moving of large stuff. The cats are shedding terribly; I usually brush them while they are in the yard during late afternoon. Still, the porch needs a good hose-down/scrub -- something I usually do every six months or so.

As I walked the dogs today, I stopped to talk with an elderly lady. She was upset because people had been dumping all kinds of stuff near her curb -- a dish-washer, old doors, building supplies, etc. I also have seen pickups stop on the streets, and guys get out to start unloading debris...don't think they live in this neighborhood, probably just dumping because they know it'll be picked up free. There's always going to be those who will take advantage of any situation; but those who do so during disasters are about the lowest of the low, in my opinion.

Sunday afternoon I took photos on the dog walk, and will post those now. (Click to enlarge) 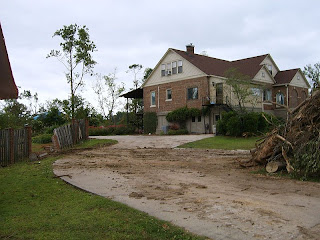 This is behind an historic house several houses from me; there used to be a large garage there, nothing left of it. 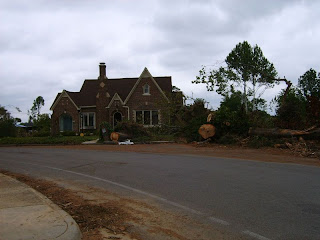 The same house from the front; it looks like a different place without the huge trees that used to be there. This was the home of one of our first city's doctors long ago. 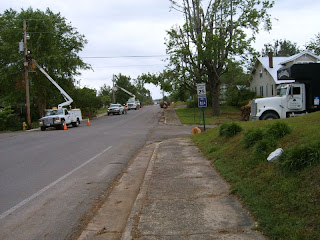 Further along the same street, work crews from the cable/internet were out still trying to fix downed lines. 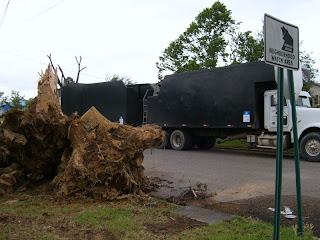 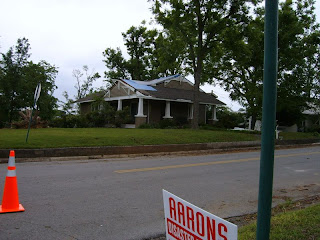 Historic house along Fifth street; it was one I had posted along my usual dog walk last year. Damaged but will probably be restored. 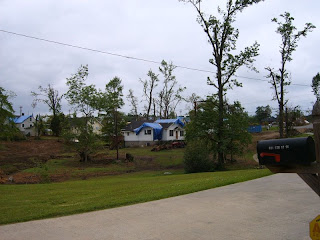 Standing on Fifth Street looking toward Fourth Street, which had terrible damage. I could not even see those houses before the tornado for all the huge trees. It still saddens me to see how greatly the landscape has changed! 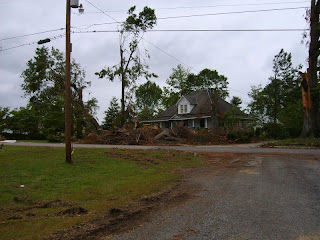 Another historic house that was spared, but with many big trees down in the yard 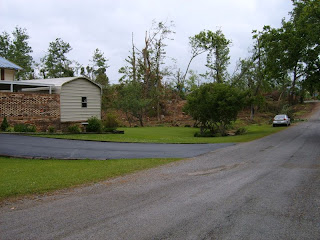 This was a beautiful wooded lot beside a house, and now looks like something out of bombed area 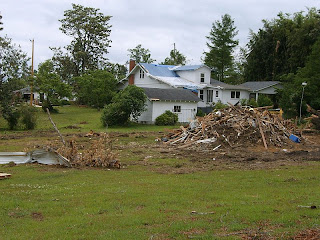 That white house is another historic home that suffered heavy damage, but can be repaired. All that debris in the lot is where a cute little rental house stood; they bulldozed it this past weekend, due to a massive tree falling through the middle of the house. 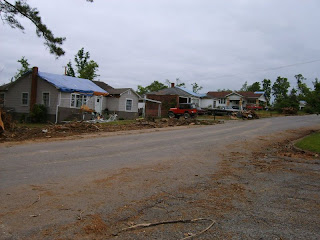 Three blocks from me, lots of damage....

One last thing: Sunday night, May 22, there will be a program on Discovery channel about the tornados across the South, including our city. Local people will be featured. Please check your TV listings for the time, if you want to see this. I am going to watch it, since I missed most of the immediate news coverage due to power outage.

It's so sad to see the devastation in your area and all over the South. Will it never end?

Hi Brenda, I sure hope we won't have any more tornadoes this year! I know I'm emotionally exhausted from the constant tragedies. At least we had nice weather after the tornado came through; those poor people in Joplin were hit with storms the very next day, don't think my nerves could have taken that.

I thought it was bad here, but Joplin was just unimaginable! And so many lives lost, still missing people. Sad. I even heard on the weather during that period there might be tornadoes in Kentucky! No place seems safe this season.