Finally, a much-needed fun trip with sister, her hubby & my nephew. They picked me up yesterday a bit after noon; we went out for some lunch at a deli, then headed about 40 miles north to Point Mallard park in Decatur. Nice drive, good to get out of Dodge for awhile.

There was a big crowd gathering for the hot air balloon show, and though it was hot, we were able to set up our chairs near a wooded area. Sitting in the shade, there was a nice breeze blowing too. Unfortunately the wind prevented the balloons from going up; but near dusk, they were inflated for "a glow show." Once inflated, they were fired up and as it got darker, created huge glowing balloons.

Before the show though, sis and I walked through the arts & crafts arena, looking at all kinds of pretty craft work. It was a bit uncomfortable though due to the heat radiating from paved walkways. Still, an interesting display.

I wish we'd waited till this afternoon (Sunday) to go instead; tonight there will be fireworks after dark. Maybe next year or the next time the balloons are there, we'll go again. You can even take a ride in a balloon -- doubt I'm that brave, but I know the view from up high would be beautiful, rolling hills and lush verdant countryside.

It was all free too! Even pets were welcome; I should have taken mine, but didn't know if there would be many dogs. There were quite a few, even an Oscar-twin!

A fun day, and nice to get away from home and try to forget all the tragedies lately with tornadoes.

And now a few pictures of the outing (click to enlarge): 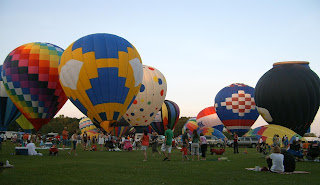 The immense size of the balloons was surprising - nothing like seeing them on TV or in pictures...as shown in the next photo. 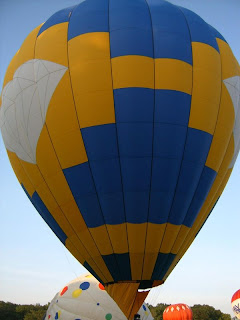 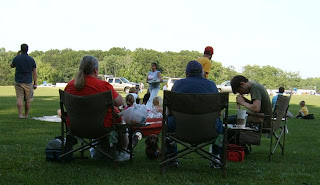 An Oscar lookalike! Those folks also had a cute doxie puppy with them. I should have taken my dogs; they'd have had a ball! 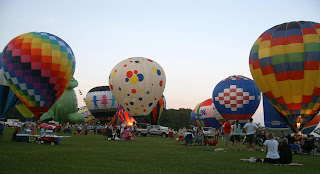 Near dusk when the balloons were firing up, giving a glow to them.

All in all, a near perfect day!

One last positive bit of news: According to the city council, they've hired a city planner to come in and design rebuilding plans for the destroyed downtown district. They are thinking of going with an historic "New Orleans look"...having two story buildings with loft apartments on the second floors. Oh, and possibly a downtown grocery store -- which would be within walking distance of me. It seems as if the town will be designed with historic features, possibly even better than before! I hope so.
Posted by Cara at 10:04 AM