I don't write nearly as often as I should, at least not for my blog. No excuse, just my mood these days.

I will eventually post about my car wreck, but for now, I am still reflecting on that. (And there's a legal issue pending.) One lesson I learned, though I had thought I KNEW it: NEVER get attached to a material object. A vehicle is to get you from point A to point B -- nothing more. It should be mechanically sound, cheap on fuel...but looks/attractiveness is simply beside the point. And that goes for ANY material object: only valuable for its specific use.

Considering the state of the world today, swine flu, economy, you-name-it, I am fairly happy. No, I'm not engaged in a lot of social activities, nor do I qualify as any particular "somebody"...but I've always been a private person, with loner tendencies. And I'm content with my current status of living alone, yet having a few friends and family I can count on.

Here's a wise little parable for the younger generation:

One day, the old German Shepherd starts chasing rabbits and before long, discovers that he's lost. Wandering about, he notices a leopard heading rapidly in his direction with the intention of having lunch.

The old German Shepherd thinks, “Uh, oh! I'm in deep trouble now!” Noticing some bones on the ground close by, he settles down to chew on the bones with his back to the approaching cat. Just as the leopard is about to leap, the old German Shepherd exclaims loudly, “Boy, that was one delicious leopard! I wonder if there are any more around here?”

Hearing this, the young leopard halts his attack in mid-strike, a look of terror comes over his face and he slinks away into the trees. “Whew!” says the leopard, “That was close! That old German Shepherd nearly had me!”

Meanwhile, a monkey who had been watching the scene from a nearby tree, figures he can put this knowledge to good use by trading it for protection from the leopard. So off he goes, but the old German Shepherd sees him heading after the leopard with great speed and figures that something must be up.

The young leopard is furious at being made a fool and says, “Here, monkey, hop on my back and see what's going to happen to that conniving canine!”

"Where's that monkey? I sent him off an hour ago to bring me another leopard!"

The moral of this story:

Don't mess with old dogs. Age and skill will always overcome youth and treachery. Brilliance only comes with age and experience. -John Brandt

And lastly, a few photos: 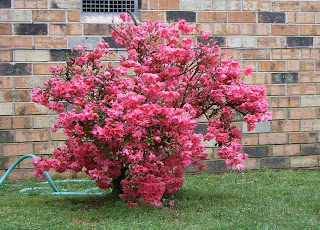 Azalea in my backyard 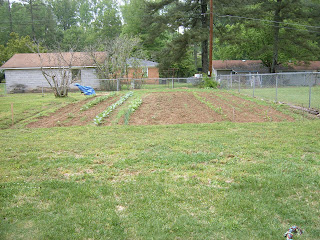 Large backyard garden on May 1st 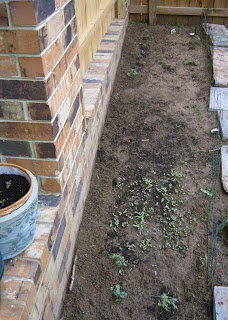 Small garden beside carport, lettuce, tomatoes, pepper & eggplants, some seed not up yet 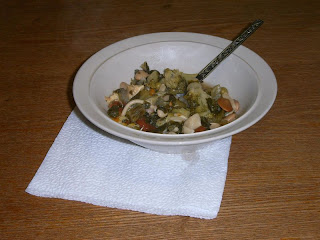 Variety veggie soup -- always different each time I prepare a batch using whatever veggies I have on hand. Keeps it interesting!
Posted by Cara at 8:57 AM