What else? We've had wild weather: highs in the 80s one week, lows down in the 30s, and now a full week of thunderstorms and rain. Rain, rain, rain! Don't get me wrong, I love a rainy day, but after a week or so, the clouds and rain start to make me gloomy.

However, I must say I've used the rainy days well: lots of batch cooking. Now my freezer is full of delicious veggie individual servings. Which means, of course, I won't have to do much cooking for quite awhile. I have never really liked cooking; I can do it, but am not one of those women who thrives on creative recipes. But once I became a vegetarian, I was somewhat obsessed about learning good recipes. I scoured the internet, experimented and found many, many recipes I love: veggie burger recipes, nutritious, light soups, fresh vegetables prepared healthy. Still, as I stated, I've never been in love with cooking. It's something I like to do occasionally so I learned to do batch cooking, which can take up most of a day, then freezing individual portions for myself, is the way I roll.

In spite of the rain, there's been a few hours every day I could take the dogs on a walk. In fact, the cooler temperatures made it enjoyable. When it gets truly hot here, my doxie, Oscar, just can't endure the fiery pavement so I have to always walk in parks with shady, graveled paths.

I also enjoy talking to neighbors along the way - yesterday I stopped to talk with a retired school teacher near my age. I think she & I may get together for lunch or outings at some point. And any time I find a house with dogs chained outside, I get the address and later, send them some literature about the harms of chaining dogs. There's a great website you can download/print poems from the dog's viewpoint, and factual material about alternatives for chaining here: Unchain Your Dog Sometimes it helps, more often it doesn't -- very sad.

I have also been doing yard work when possible. I had a big job day before yesterday: Below the fence on the lower side of my house there were tons of pecans piled up, which was creating a drainage problem. I spent months picking up pecans, but there still remained those I didn't get. At any rate, I had to rake those out from under the fence, shovel the dirt out and take it all to the curb. My back was hurting so bad when I finished that 3 hour job, I was near tears. I had Flexril (prescription) so I took half of one and that helped. I have 5 herniated discs in my back, though no nerve involvement, so I have to be careful. Mostly I just had muscle strain, and fortunately the next day it wasn't as bad as I'd expected.

I'm not sure how long I can continue with this hard physical labor in the yard. If I can just stay with it for this summer, I will get DH's social security by next December -- and hopefully can hire it done. Even though I have a pension right now, medical insurance takes a huge chunk of it each month. And I do have substantial savings, but I'm trying to preserve that for the years ahead.

Got off on a tangent there.

Anyway, I've been letting the cats out in the backyard in the early evenings. Bitty Kitty & Slinky love prowling around and sniffing everything, as well as racing up and down the trees. Fortunately they never go over the fence; Bitty did last summer, and when she couldn't get back over, I had to "rescue" her from neighbor's yard. Don't tell me cats aren't smart enough to learn: she NEVER gets on the fence now!

There has been some funny moments though, because Sore Paw (the stray I feed) gets on the fence and watches my indoor cats. He sits there patiently, just watching....but occasionally he slinks down the fence. The first time he did that, Bitty Kitty backed him up in the corner, and he raced back up the fence! LOL The last couple times he got down into the yard though, Slinky and Bitty have raced back to the house and leaped through the pet door. Poor 'ol Sore Paw doesn't know what to think, but they just keep rejecting him!

Here's some photos of that situation (click to enlarge): 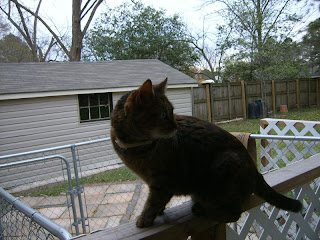 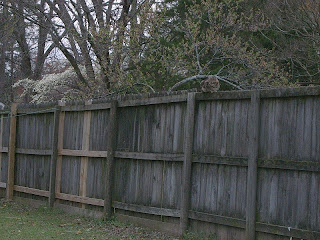 This is what she sees: Sore Paw on the fence, gazing at her 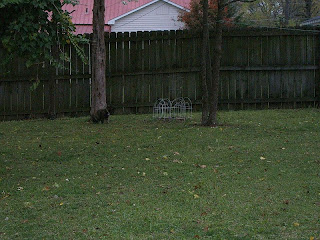 Meanwhile, Slinky is at the back of the yard. Once both saw Sore Paw they raced into the house.

Several nights ago I had the most beautiful dream about DH. I was sitting here in the den and I heard him drive up. I knew his distinctive footsteps, I was waiting for him to come through the door. When he did, he was wearing his favorite brown sweater pullover. I got up, ran into his waiting arms. He hugged me so very tightly, and said, "I love you so much!"

Then I woke up to the reality he'll never hold me like that again. But I can still hear his voice saying those words, which I'd heard so many times in our marriage.

I'll close with something I found circulating on the internet, thought-provoking:

The Situation
At a Washington, DC Metro Station on a cold January morning in 2007, this man with a violin played six Bach pieces for about forty-five minutes. During that time, approximately two thousand people went through the station, most of them on their way to work.

After about three minutes, a middle-aged man noticed that there was a musician playing. He slowed his pace and stopped for a few seconds, and then hurried on to meet his schedule.

About four minutes later:
The violinist received his first dollar. A woman threw money in the hat and, without stopping, continued to walk.

At six minutes:
A young man leaned against the wall to listen to him, then looked at his watch and started to walk again.

At ten minutes:
A three-year-old boy stopped, but his mother tugged him along hurriedly. This action was repeated by several other children, but every parent, without exception, forced their children to move on quickly.

At forty-five minutes:
The musician played continuously. Only six people stopped and listened for a short while. About twenty gave money but continued to walk at their normal pace. The man collected a total of $32.

After one hour:
He finished playing and silence took over.
There was no recognition at all.
No one knew this, but the violinist was Joshua Bell, one of the greatest musicians in the world. He played one of the most intricate pieces ever written, with a violin worth $3-5 million. Two days before, Joshua Bell had sold out a theater in Boston where the seats averaged $100 each to sit and listen to him play the very same music.

This is a true story.
Joshua Bell, playing incognito in the DC Metro Station was organized by the Washington Post as part of a social experiment about perception, taste and people's priorities.
The experiment raised several questions:

* In a commonplace environment, at an inappropriate hour, do we perceive beauty?
* If so, do we stop to appreciate it?
* Do we recognize talent in an unexpected context?


One possible conclusion reached from this experiment could be this:
If we do not have a moment to stop and listen to one of the best musicians in the world, playing some of the finest music ever written, with one of the most beautiful instruments ever made . . . how many other things are we missing as we rush through life?
Posted by Cara at 3:49 PM