Nothing much to write about...

I have been meaning to update this blog for a long time -- obviously since I last posted in early April! However, I think my blog writing interest has waned to the point of becoming non-existent. I choose to spend whatever writing energy I have working on my memoir. And, of course, my life is very peaceful and non-eventful. Just the way a semi-loner likes it, therefore I don't have a lot to gripe about or share.

I do think I'm more of a loner than a writer. I do like observing people, but I find the older I get the less and less I enjoy writing what I observe -- whether in non-fiction or fiction. And while I once thought I'd be devastated if I couldn't write every day, I've found that it doesn't mean all that much to me anymore. Or maybe I just have no 'burning' itch to write passionately anymore; I think all writers must have that basic passion for the subject matter, or the story/article falls flat. And these days I'm not passionate about much, other than the memoir-in-progress.

At any rate, just to let those who read this blog occasionally know I haven't forgotten you all...I thought I'd post some recent photos of life for me. 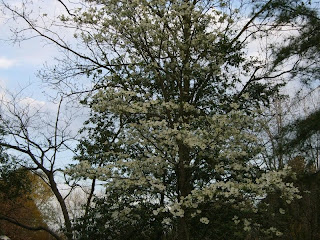 Glorious dogwood in my backyard in full bloom 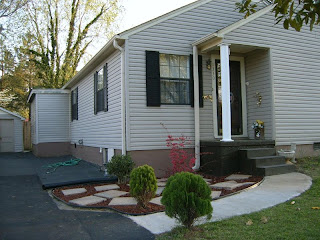 Curb appeal project in front of house; I plan to set some potted flowers on the landscaping blocks. The lava rock truly looks good with the colors of my house 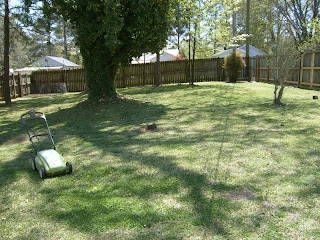 My Neuton battery operated lawnmower in the backyard, after I'd just mowed the lawn. LOVE IT! 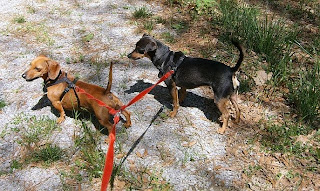 Oscar & Rambo at nearby park, ready to rumble! 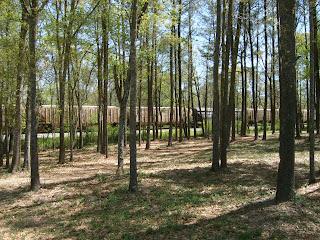 The train beside the same nearby park. The area near this train track used to be called "The Hobo Jungle"...it was overgrown with weeds/bushes and destitute people gathered there, some using drugs. Don't know if they were 'hobo' types or if that was just a phrase. Anyhow, the area was cleared out by the city, creating a lovely little 1/2 mile walking trail. The dogs LOVE it, since it's wooded and they feel like they are out in the wilds of a forest. LOL

I do need to say I am so HAPPY I sold my other house; it was in the nick of time, since the insurance, termite bond, were coming up next month. I am glad to get that burden off me, and looking forward to having maintenance on ONLY ONE house!

I do tweet every day, with the updates of my daily life. And now it turns out those 'tweets' will be preserved at the Library of Congress. I suppose some history scholar in the future might like the access to 'daily life' of those in our era. I have no problem with it being preserved, though I suppose some might. But as a writer, I have always known that what I write is forever preserved ... in one way or another.

Family is all well, though the recent death of an elderly aunt was hard on her immediate family. I have only one paternal aunt living now, and she suffers from various medical issues. I know that many of the deaths in family over the past four years is due to age -- 75+ is a normal long life for men/women in the USA. Most of the losses in the last couple years have been relatives past that median age.

With that, I'll close today with a quote from a doctor regarding too many medical tests (which I do think are done in excess, and refuse for myself):

"It's human nature to want to do everything to protect yourself and your loved ones. I remember talking to a patient who said he would want every test possible to look for cancer, even if the risk of finding anything was minuscule. I tried to explain to him that the CT scan he wanted would expose him to enough radiation to raise his risk of cancer by 1 in 100,000, and the chance of finding a tumor was only 1 in a million. Pretty much, it would just be increasing his risk of cancer 10 fold. Still, he wanted to have the test done. He wanted to be actively doing everything he could to prevent and treat cancer, even though it would be harmful for him in the end. I understand the impulse, but the new recommendations (for mammograms) are based on data and not emotion. And they are most definitely not politically motivated."
Posted by Cara at 4:27 PM