We had a great family get-together last Sunday, an early Thanksgiving for us. My sister, Glenda, and her husband invited us to their house. We haven't been meeting for our family holidays at her house since the first T-Day after DH died. At that time, it was somewhat traumatic for me, as well as my mother since my step-dad died in late October of that year.

Everywhere I turned, I kept expecting to see DH, hear him joking with the kids, talking with my brothers-in-law. So I didn't attend other gatherings there, until this year. It went well, but I have to admit, I STILL felt as if DH would walk into the kitchen at any minute.

Some widows/widowers apparently like to stay in familiar surroundings, the same house, the same places after losing a spouse. I don't think I could have coped had I not sold the farm, and moved here to a house where DH had never been. The move, of course, did not stop my memories or thoughts about him; rather, I just didn't expect to see him drive up in the driveway, or be sitting in the other room -- because he'd never been here, never lived here.

The rental house, where we lived 25 years, is always a reminder of him when I'm there working between renters. I find that at first, I like the vivid memories, but after a week or so, I become depressed. I cannot bear to be in that house around supper time, when he would have come home from work. I am still not ready to sell that house though, but I doubt I could ever live in it again. As with all grieving and coping after the loss of a loved one, each person deals with it differently. Apparently I do better not living where we once did, though I do occasionally drive by the old farmhouse -- just to see how the young couple are caring for the farm (they keep making improvements to the property too).

At any rate, two of my sisters, their husbands, two nephews and the other nephew's two little girls, mother and myself were present. Mother is looking pale and becoming more vague; her last kidney function tests showed her one kidney continues to decline. She has refused dialysis and has a living will, so we're all concerned she won't be with us much longer. But we had a wonderful day of family sharing, good food (several veggie dishes prepared for me!) and fun conversation. 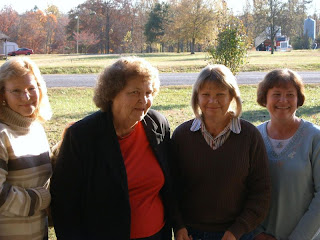 Left to right: myself, mother, my two sisters 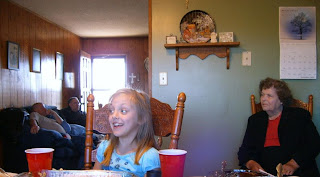 Sarah, nephew's girl (a real beauty & mischievous), mother and in the background, my two brothers-in-law 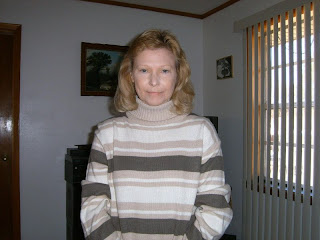 Yours truly, taken with self-timer in my den Sunday morning 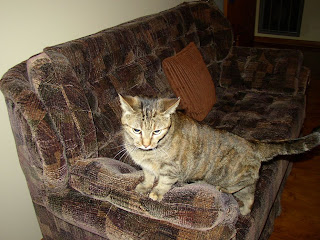 I've been using my exercise bike every night, since the weather has become cold here. Today the high was only 38, brrr! A stiff wind this morning, but it died down by late afternoon.

I'm going to start a job search sometimes next month, just to see what is/isn't available. IF possible, I would like to return to work in early January (new tax year!).

Renters continue to be great; Sherry helped me hang vertical blinds in my den/study last week. She raked leaves at the rental house, ran them through her lawnmower mulcher and will bring those over to put on our garden spot sometimes this week. We're making plans for the veggie garden, and there is a cement slab near the garden space where an old storage building stood. I'm thinking of buying one of those small green-house enclosures and put it on the slab, so we can start plants early, etc. Just hope this drought improves during the winter and before next spring!