Yeah, I just keep trying to find the dog I want.

And though it may be premature, I think I found him today: at the local animal shelter. His name is Rambo, he's a Miniature Pinscher, and has the sweetest, lovable nature of any dog I've ever known. He loves to be cuddled, and loves lying my lap. He has obviously been socialized (the shelter people said he must have gotten lost from his owners, or they abandoned him but he'd been there a long while, and his days were numbered) is outgoing, but also quiet-natured. He likes to play, but he'd rather cuddle. After paying the fee at the animal shelter, I took him by the vet for a rabies shot/checkup, and next week he'll be neutered. First I want to spoil him here, and let him settle in a little.

I still have the crate I got for Otter, which is huge, so I'll try to crate train him, and allow him and the cats to get acquainted...gradually, and without direct contact. Rambo is definitely going to be an indoor dog, my companion...no doubt.

Here's his picture from the shelter: 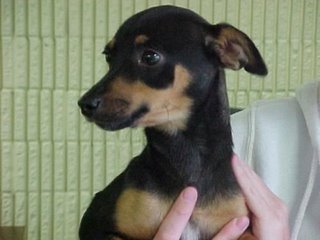 He weighs only 10-12 lbs, and I could actually get him in my small cat carrier! :-) I can easily pick him up, and he isn't a biter/nippy, lets anyone hold him or tote him without trouble.

I am SO happy I found the little rascal.