Midnight. I just finished reading Alice Sebold's memoir, Lucky. It deals with her violent rape at the age of 18, while in college. Excellent memoir, highly recommended.

I have chosen to read memoirs that are somehow related to either family violence or violent acts by strangers. There is much to learn in simply reading these memoirs, and studying how the writers can take you inside the mind of a victim. Though none of my dysfunctional family experiences include sexual violence, just being in the presence of repeated domestic violence -- witnessing it occurring to others -- has a lasting impact. Usually in the form of lifelong post traumatic syndrome from which few ever fully recover. Instead, they learn to live with it.

It takes awhile for me to actually attempt the writing of traumatic memories, because it is truly like reliving them entirely again. I think it has to be experienced in this way in order to create the reality for others, though it takes a toll on the writer.

On to other matters, this month marks the first year anniversary of my becoming a vegetarian. I'd love to say it has been easy, but it has been a struggle. I adjusted to the diet easily, enjoy experimenting with veggie recipes, but it's the lack of understanding here in the South that truly creates difficulty.

It's no secret why the South has the most obesity; eating here is a pastime, a social event, impossible to avoid. And that means socializing for any occasion includes lots of fatty foods, sweets, fried meats, unhealthy eating. Trying to explain this to the average southerner brings puzzled looks, awkward questions about "why" I don't eat meat. No matter which tact I take, the route of trying to eat healthier to placate people or in frustration, declaring I love animals and do not want to eat flesh, I just can't win. Frankly, this has caused me to hate socializing that requires eating, as does almost all such occasions.

Now I've never been an extrovert and can do without the added friction of explaining my food choices...but I'd never realized exactly the magnitude and scope of how difficult it will be to entice people into eating healthy diets. The ONLY way I see this happening, for the sake of health and the impossible costs of paying for obesity in medical care, is to implement a gradual increase in costs of unhealthy foods. Taxes, fast food, restaurant meals along with educational efforts, and then hopefully, over time reorienting social events that include such crippling foods. It will not be simple or easy and I know that from my firsthand experience.

I can say honestly though, I have no intention of ever including meat in my diet again. I don't miss it, and can't even stand the scent of cooking raw meat or the taste of it either. It was more than just a one year process though; I'd gradually begun this process when I turned 50. Basically it has taken 7 years, the last one finally achieving vegetarian status.

As for my health benefits, I eat all I want and never gain weight. My blood pressure is low, and I feel well too. I haven't had a cholesterol test, but will do that soon; I did have my blood sugar tested, and it is normal. Since I have a family history of diabetes, this is definitely good.

I do not think that vegetarianism is the cure for anything and everything, nor do I try to force my diet on others. I don't even mention it unless someone asks why I'm not eating meat -- usually they try to force it on me. Illness happens, because frankly, humans are mortal and mortals die from one ailment or another eventually. However, I do know that eating excessive fat, salt, sugar (all of which are in abundance in fast foods and most restaurant menus) will cause serious chronic health issues and/or heart attacks and cancer that costs everyone. That in turn creates more need for pharmaceuticals to treat these chronic conditions that could, in most instances, be avoided simply by diet alone. It's impossible to even discuss this here in the South; people don't want to hear it, or accept that bad eating habits cause many chronic problems. Especially if they are involved in the cattle, chicken or meat processing, restaurant, fast food businesses for their livelihood. And many are, since the county I live in is considered the leading poultry producing county in this state. Huge poultry factory farms dominate the rural landscape, blighting what otherwise is beautiful countryside.

You can see where this puts me at odds with the majority, and I've learned to keep silent when socializing. But then again, I don't socialize that much.

As for dating, I always suggest a restaurant where I know there's a buffet with vegetables, and you'd be surprised how often a date will not even notice I am not eating meat. On the other hand, if it looks like there might be future dates with the same person, I have to explain I won't prepare meat for them...which leads to the discussion. Truthfully, they usually seem to think I'll change my mind; but when I see someone will not respect my choice, then I start to withdraw and eventually never see them again. Of course, that limits the dating arena, but then again, I'm not looking for a marriage partner anyway. Just a fun companionship date now and then.

I was talking on the phone to my sister earlier, explaining my sessions of writing the memoir. She has always been supportive of my writing, but today she asked, "Why would you want anyone to know about what we went through as children?"

I told her the fact she even asked that shows why I have to write about it; the "shame" factor, keeping it a big hush-hush secret pervades that kind of childhood. To this day, we all feel a sense of shame -- and we were not to blame, instead being innocent victims, struggling to survive dysfunctional parents. The shame factor is what keeps so many children (and later adults) from revealing the truth of their home life and until this is overcome, no progress can be made. Progress starts with revelation, hard truths and realizing one is not responsible for abusive, dysfunctional parents' behavior.

I have already taken the dogs to the nearby wooded park. Windy, sunny but shady in the park, a perfect walk.

Now for the renter saga. I could write a novel based on the tenants I've had in my rental house and maybe I will someday. At this point though, the house is becoming a liability financially. For all my compassion, working with S&W, trying to let them stay there...it's just not working out. I reduced the rent with the condition they would help me when needed. And also help with my garden, which started out great, then went downhill from there. Once the planting was finished, they didn't want to do any weeding and I ended up doing what little I was able to. I hurt my back several times, and every time I asked them to come over and help, they had an excuse.

Increasingly, they seem to take for granted I'll let them stay there, even if they pay no rent. I'm all for helping others, but I also know the point at which one is being taken advantage of. As a landlord this has been the case in every tenant except the very first one, while my husband was still alive. It's finally dawned on me that I am not going to be capable of dealing with tenants, and the house is costing me more than its worth. Hence, it has to be sold.

Getting S&W out won't be easy, I'm afraid. I told them over a month ago to start looking for a place, that I was going to put the house up for sale. When I saw them a couple days ago, they started in with the usual:

On and on, and eventually I say I'll only sell the house if it's necessary. But will give them 30 days notice to move. And I'm thinking of doing just that by mid-August, asking them to leave by the end of September. I may go ahead and have the realtor list it in September though.

As for the condo two blocks from here that I looked at last week, I'm still keeping it in mind. Saturday the realtor wants to show me another condo across town, a bit less pricey. However, I just fell in love with the floor plan and decor of the one near here, and wouldn't have to leave this neighborhood either. In order to get it though, I'll have to sell both my houses or at least the one I live in first. I don't want a mortgage, so unless I have enough to buy it and some substantial savings left, it won't be possible.

The monthly maintenance fee is low for that condo, and I can see me living there the remainder of my life. I love having the garden and fresh veggies but frankly, the herniated discs in my back will prevent me doing that again. The back problems are something that are going to get worse, not better, with time and I have to make arrangements accordingly. I've accepted that I am not able, physically, to do the required outside maintenance here -- lawn care, exterior upkeep, etc. Hiring it out is more expensive than the fee on the condo, and also likely to cause me to have an accident when I try to do that. With a high deductible on medical insurance, I can't afford an accident that might be preventable.

At any rate, that's where I stand on this issue. Still undecided, but definitely going to pursue the possibility of selling/moving. Unfortunately, there are not many condos in this town, so my choices are limited. But I am looking, and hope to find a suitable one at some point.

I'll be writing posts more often, using this method of entries via the QuickPad.

Now I'll end this with a photo of a delish veggie sandwich I had last week. Grilled pattypan (or scallop squash) with ripe tomatoes, light mayo, and wheat bread. 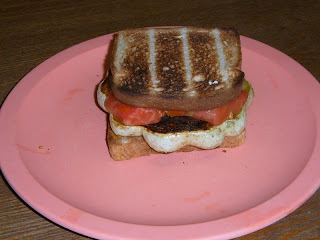