Today was a gorgeous day...nearly 65, sunny, no wind. I took the dogs for an early morning walk in the neighborhood, then did some housework, etc.

Later, I went on a long bike ride and when I returned, I decided to take the dogs to the nearby park. I let them into the car, halters/leashes on, and we went to the park where I used to bike. Rambo is very serene when riding; he will even lie on the seat and make no fuss. Oscar, however, wants to stand at the side window and look out, slobbering on it too. He whines, whines, whines...but once we were at the park, they had a GREAT time. There's a small wooded section, and I let them romp through it as if they were actually out in the woods somewhere. On the return trip, I parted the window a little, and Oscar loved sticking his nose out, just to get a whiff of whatever we passed. I'm hoping I can get them both accustomed to traveling in the car, so I can take them to different places for walks.

Yesterday we all met at my mother's place, and cleared out more stuff. All the closets are empty now, and we had two pickup trucks full of discards: some to the Goodwill, some to the dump. Exhausting, not to mention that it rained all day and was dismal. We think one more full day of work will have the place cleared out for the new buyers, but that will probably be sometimes in early January.

Late in the day, after I returned home, one of DH's fellow workers dropped by to give me a keepsake from this year's rodeo. The rodeo was dedicated to DH this year, and though I didn't go, the co-worker told me all about it and gave me the program to keep. I was afraid I'd cry through the ceremony, so I just didn't go. And he understood, I suppose.

No family gathering for Christmas this year. We all decided to cancel it; my sister who usually hosts it is exhausted from taking care of mother, and having her own two grown kids/grandkids there on Christmas, so we decided against it. I had already made a decision NOT to go, and don't regret that. Every time we get together there, I remember DH so much; it feels like he should be in the other room joking with the kids, or talking to my brothers-in-law. It will be easier for me to spend this holiday alone.

And finally, I decided on my Christmas gift to myself: DSL internet from Bellsouth. It will cost $25.00 a month, but I think it'll be worth it. Since I moved back to town, the slooooooooooow dialup speed has been horrendous; it takes me FOREVER to get anything done online, and all the websites with video, pictures are virtually inaccessible. Which means MOST of the websites, since between flashing/java ads and loads of other unnecessary crap, it takes too long. My DSL modem arrives next week, and I will install it myself.

For all my readers, I wish you a Merry Christmas and that you remember to cherish the moments you have with a beloved spouse; it can end in a flash, without warning.

And then for a laugh, I have to post this tacky photo I found recently on the web: 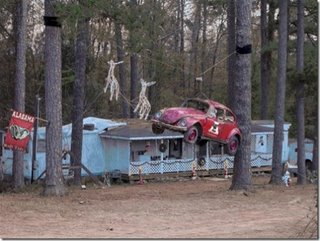