Leaves are all gone...

Thank goodness! I've raked leaves from one huge Bradford Pear tree for at least two weeks, off and on. And while I love it, I'll have to have it removed before spring. Turns out that I can't get an awning/extension beyond my (now fenced) carport (zone ordinances), and this tree is ruining my car! I won't miss raking all the leaves though.

I have several smaller trees in the backyard, and have it all tidy, neat now too. Seems like I've worked for a week or so on getting my yard in good shape, and next summer I plan to mow my own lawn too. Just got to find the right lawnmower (push, not riding) and think of it as GREAT exercise!

Tomorrow all the family is meeting at my mother's house to sort out and dispose/store most of her stuff. She will be going into assisted living soon, if the financial stuff works out, and her place is in the process of being sold. I dread the work, and it hasn't been that long since I had to do the same kind of grueling emotional/physical labor in clearing outbuildings, barns, house, etc after DH died. Must be done though, no use complaining.

Today I took Rambo and Oscar (separately) on long walks; I want them to know the neighborhood, in case they get loose they'll be able to find their way back home. Then around 4:00 in the afternoon, the gate was barely open (I was bringing in the rake) and sure enough, Rambo shot out of it and took off. I called him a couple times, then just left the gate slightly open to see if he'd return. Within FIVE minutes he was at the back door, whining to come inside!!! I try my best NOT to let them out of the fence, but accidents do happen and it's best if they "know" the neighborhood and how to get home.

I also took these cute photos this afternoon. It was only in the 40s here today, so I put their "outfits" on them, and let them romp in the backyard for awhile. 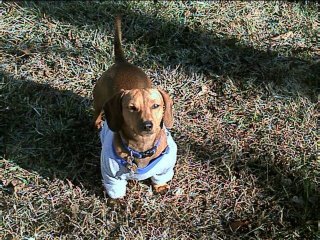 Oscar mugging for the camera 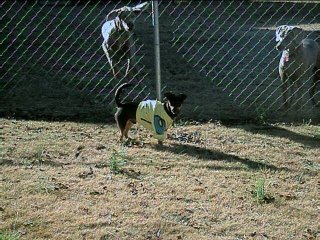 Rambo at the fence by neighbor's dogs 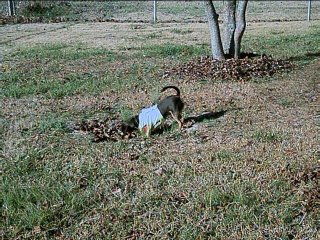 There's more, but I'll post them later. I do hope to find a new digital camera soon, maybe next week.

And I'll end with a list of rules for dating I found on widownet.com...

Stop making excuses for a man and his behavior.

Allow your intuition (or spirit) to save you from heartache.

Stop trying to change yourselves for a relationship that's not meant to be.

Never live your life for a man before you find what makes you truly happy.

If a relationship ends because the man was not treating you as you deserve then heck no, you can't "be friends." A friend wouldn't mistreat a friend.

If you feel like he is stringing you along, then he probably is.

Don't stay because you think "it will get better." You'll be mad at yourself a year later for staying when things are not better.

The only person you can control in a relationship is you.

Avoid men who've got a bunch of children by a bunch of different women. He didn't marry them when he got them pregnant, why would he treat you any differently?

Always have your own set of friends separate from his.

Maintain boundaries in how a guy treats you.

If something bothers you, speak up.

Never let a man know everything. He will use it against you later.

You cannot change a man's behavior. Change comes from within.

Don't EVER make him feel he is more important than you are...even if he has more education or is in a better job.

Do not make him into a quasi-god. He is a man, nothing more nothing less.

Never let a man define who you are.

If he cheated with you, he'll cheat on you.

A man will only treat you the way you ALLOW him to treat you.

All men are NOT dogs.

You should not be the one doing all the bending...compromise is a two-way street.

You need time to heal between relationships... there is nothing cute about baggage. Deal with your issues before pursuing a new relationship.

Dating is fun...even if he doesn't turn out to be Mr. Right.

Make him miss you sometimes... when a man always know where you are, and you're always readily available to him- he takes it for granted.

Don't fully commit to a man who doesn't give you everything that you need.

Keep him in your radar but get to know others.

{By the way, this was written by a man.}

Sunday is my birthday. I'll probably spend it alone. I was looking forward to turning 55 until DH died. I always thought it'd make me eligible for all those 55+ benefits. Now it just seems sad and means I'm getting OLD!
Posted by Cara at 8:03 PM