But it's a gray, windy, rainy day and I can enjoy being indoors. Still have housework to get done, then I can hopefully settle down to some writing. I'm working steadily on flash-fiction projects, planning to post a few of those ultra-short stories when I have a few finished.

Here's an article (excerpt) I came across this morning, which reeks of wretched excess:

In the two years since they moved into their voluminous 8,000-square-footer on the edge of Virginia's suburbs, the Bennett family has not once used their formal dining room, where the table is eternally set for eight with crystal, an empty tea set and two unlighted candles.

Not even guests use the palmy, bamboo morning room beyond it; and the museum-like space Bonnie Bennett calls the Oriental Room -- all black lacquer and inlaid pearl, fur, satin and swirling mahogany -- is also gloriously superfluous.

"It's kind of stupid, because we never sit in here," said Bennett, 32, who bought the largest house she could for the investment.

But she carried around a crumpled photo of the furniture for eight years, and now that she has space for it, she admires it as others might a work of art.

To drive out into suburbia these days is to survey a landscape of plenty, a place where relatively average people such as Bonnie Bennett, a loan officer, and her husband, a computer salesman, are living ever larger with three-car garages and media rooms, solaria and conservatories.


For Donna Sproles, who lives about a mile away in Green Gables, the quest for more meant not only more house, but also more land.

She and her husband have their 6,000 square feet on 10 acres, which, in her view, provides a little more freedom and independence.

"What I love about this is it's so big that we can go into different areas of the house and have private time, if you will," she said, sitting in the family room of her $800,000 home with her two sons. "If Jonathan wants to play, he's in his area. If Justin wants to go online, he's in his room and he can do that. If someone wants to come in here and watch TV, that's their space," and if she and her husband want to watch TV, they have their own private sitting room, far enough away that the two do not interfere.

She grew up poor in West Virginia, with an outhouse and no running water at times, and made a decision early on that she would never live like that again.

"I wanted to become an executive of some sort," said Sproles, who did became a successful computer salesperson. "I wanted to have a cell phone and all that came with it. My vision was to have a big house, drive a big car. . . . I don't know where I got it from -- probably TV. I guess that's where I got it. Maybe 'Dallas.' "

You can read the entire article by clicking on the title. Goodness, those MacMansions make our little humble farmhouse seem like a trivial place to live. I have never quite understood WHY anyone would want to live in a HUGE, NEW house (no personality like old houses), which requires exorbitant energy bills, upkeep, you-name-it. Property for space, I think is reasonable; but why have an ostentatious house in a suburban area? Methinks it could be for social status -- or, oh yeah, the influence/brainwashing of TV. Remodeling and/or restoring old houses that have stood for years and years, sharing the history of such a home, that I can understand though.

I found a photo from my old digital camera I thought I'd post. I took this several years ago when I was documenting all the old cotton gins/mills still standing in this county. I plan to do a series of these eventually, a "photo essay." But this photo was somewhat unique: 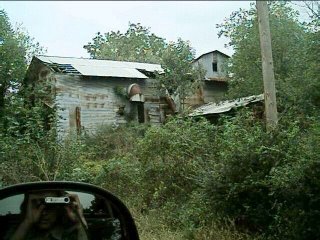 Yep, that's me taking the photo -- seen in the rearview mirror! A bit different.

Stayed up a bit late last night watching a romantic movie, the remake of Sweet November. I had seen the original waaay back in the 60s, I believe, and was curious about this remake. Charlize Theron is fantastic, as ever, but Keanu Reeves seemed to be out of his element (action yarns). Anyway, I'm a sucker for a tear-jerker romance, and had sniffles near the end. Guess that's a compliment to the movie.
Posted by Cara at 10:27 AM

Hi, Thanks for your interesting blog. Keep up the great work! I also have a site & blog about bad credit car loan
, please feel free to visit.

Thanks for all the great comments and insights..By the way, are you looking for more information on House Remodeling ..If so here is a fantastic resource for everything related to flowers and House Remodeling with information, products, articles and more..Check it out here...http://www.floridakitchendesigns.com

I just came across your blog and wanted to drop you a note telling you how impressed I was with the information you have posted here.
I also have a web site & blog about car loan company
so I know what I'm talking about when I say your site is top-notch! Keep up the great work!