First, Merry Christmas to all who read this blog! Hope you have a wonderful holiday, enjoy the weekend and get at least ONE gift you really, really love.

Looks like DH and I will attend my family's gathering after all. My sister talked me into it! I went on a last-minute gift-buying frenzy yesterday, got all the presents wrapped today, so I'm set to go. We'll have the get-together on Christmas Eve at the same sister's house where we had Thanksgiving. I'm hoping of a repeat performance -- everyone there, warmth, joy. I'm especially hoping I get some great pictures of us all together with my new camera, since I can select the best and get it printed.

We've had COLD weather this week, but it'll warm up tomorrow and then possibly rain late Christmas Eve. On Christmas Day, in the afternoon, DH and I will see a movie at the nearby theater. I'm still undecided on which movie we'll watch, but there's several showing that look promising. I'm leaning more toward seeing "Rumor Has It"...since I was a big fan of the long-ago movie, "The Graduate."

DH's broken toes are healing well; however, he has a nasty-looking bruise/gash on his shin that happened at the same time. Apparently the horse's hoof hit DH's shin first, which is a more serious problem. The orthopedic doctor has him on the antibiotic cipro, and he's wearing a "boot" brace. But the shin wound keeps getting irritated, and is badly swollen, tender, sore, hot. He is following doctor's orders, but having some pain with that area. We just hope it heals, and the infection responds to the cipro.

He's beginning to have doubts about the whole horse thing, now that he realizes the complications that can arise from injuries and/or the medications. I wouldn't be as alarmed over him having minor accidents if he were not on so much heart medication that can truly cause complications. For example, the Plavix thins his blood so much that the least little bump produces a HUGE knot/bruise which takes days, if not weeks, to heal. IF he should ever get a head injury, we both fear that the bleeding around his brain would be a disaster!

Frankly, if it were me, I'd half the dosage of ALL the doctor has ordered. Once I was on extremely dangerous medication, and had I not cut it waaaay lower than the recommended dosage (eventually stopped taking it without the nephrologist's permission), I'm sure I'd be dead by now -- not from the kidney ailment I have, but from the "medication." But he has to make his own choices and decisions.

New update at my CR Diet blog; link on the sidebar, if anyone is interested in my dieting adventures.

I'll close with a picture I took this weekend of a roadside swamp; I thought the treestump shadows were interesting. 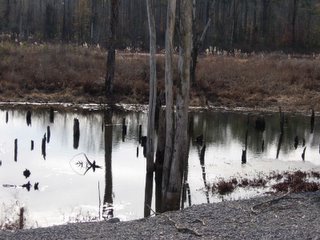 Nice blog. I also have a blog of my own at CashCurve.
We offer lots of different online
business opportunities, work
at home jobs and paid autosurf
programs to help folks make some extra income. Come by when you get a
chance.