The year from hell continues!

When DH returned from horseback riding Saturday he said that his horse had stepped on his foot. We examined it, and the toes just looked badly bruised. He said it was sore, but not terribly painful...and he didn't think the toes were broken. He takes Plavix (a blood thinner, ironically called 'rat poison' by his cardiologist once!) and we assumed some of the purplish bruising was due to excessive bleeding beneath the skin, not a break.

Sunday we did our usual thing: went on a short drive. I took some pictures of various places along the way, and then we returned home. DH's toes were still swollen, so this morning he went to the doctor. And of course, the toes are broken! He has to see an orthopedic doctor tomorrow afternoon; for now, he's wearing a brace. He's at work, since his vacation is over, but he stays at a desk most of the time anyway.

I think his days of horseback riding (and having horses) are numbered -- due to all the heart medication he takes, and the accident potential.

I knew this year couldn't possibly end without MORE problems. I sure won't be sorry to see January 1st 2006 arrive!!!!

And just so I won't forget this: While we were at one place, I took a photo of DH. Then he took a couple of me. When I downloaded the pictures to my computer, they all looked fine. Except one. Strangely, the photo I took of DH was totally BLACK/BLANK. I have no idea what to make of that, because when I glanced at the pix monitor on the camera after I took the picture, it seemed fine. Call me stupidstitious...but these weird episodes with digital cameras creep me out at times.

Here's one of the pictures I took Sunday afternoon: 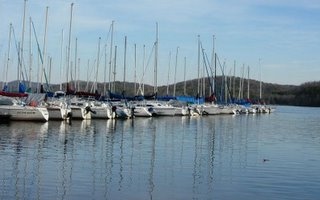