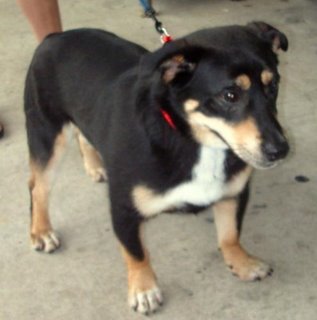 Meet Otter!
Yes, I'm getting a dog! I will, hopefully, adopt him Saturday at Pet Depot. I saw him there a couple weeks ago, and simply fell in love with him. He is a Corgi/Rottweiler mix, and though I've had lots of advice against any dog with Rottweiler in it, I'm fairly certain there's more "Corgi" than "Rottweiler" in Otter.

Additionally, I'm probably going to start doing volunteer work for a local animal welfare organization that is just getting started. They get pets from the animal shelter, and foster them out, try to find good homes. That's how Otter ended up at Pet Depot, since they have cats/kittens/dogs there for adoption. And most of the ones there DO find good homes.

I saw that Otter was still up for adoption on their website, and contacted them via email. The lady wrote back and said that Otter HAD been adopted out the day I saw him, BUT they only kept him one day because he was so shy, he hid under the bed. The people had children, and apparently the noise scared him. Now that is MY kind of dog!!! Poor Otter, when we took him out of the crate at Pet Depot, he was trembling all over, as if scared to death. That is why I almost adopted him then and there.

At any rate, the lady said Otter would be at Pet Depot Saturday and she would also. And I could adopt Otter, and sign up for volunteer work with their organization. IF I still had the farm, and that large barn, I'd no doubt let them use it to house homeless animals. But I think I'm about to embark on a new direction in my life -- still writing, of course, but having another meaningful part-time volunteer project to help animals.

I hope all this turns out well, but at least I feel like I am about to embark on a fun adventure!
Posted by Cara at 11:07 PM

I had a wonderful, 50lb corgi that someone stole a week before I delivered my son almost 3 years ago. She was what we called a 'footstool' and her name was Sugar. One day, I hope to get another dog, maybe a Dashund.

Sorry I've not been by....glad to see you doing better.

Hi, I found your blog through John Baker's blog. I just had to say that that is the cutest dog I've ever seen. And Otter is the greatest name ever. I hope it works out and he gets over his shyness.