I had a sad, bad weekend. I lost one of my cats, "Buddy/Little Bud." He was only four years old, but had suffered from a variety of ailments. The worst was his problem developing kidney stones; he'd been on medication and a special diet of dry food most of his life.

Late Saturday night he seemed to have a stroke -- his eyes had been weird for two years -- one dilated while the other remained narrow occasionally. I assumed (and the vet did too) that he had a brain tumor which sometimes caused this. At any rate, I had decided some time ago that when/if he suffered a stroke, I would NOT subject him to the vet's tests, etc. He also had leukemia, and both his littermates died with it their first year. He was unable to walk after the stroke, could not co-ordinate his movements, was lethargic, would not eat, etc.

I prepared a special enclosed place for him on the sunporch, and monitored him that night and all day Sunday. He died Monday morning. Buddy HATED the vet, would start yowling if I even started to put him in the carrier. No doubt he had bad memories of the time he had to have a stone removed! So I let him die peacefully at home in his familiar surroundings, with the other cats nearby but unable to bother him.

I'll miss the little rascal; he was my faithful lap cat every night while I watched TV. That is how he got his name, being my "Little Bud." 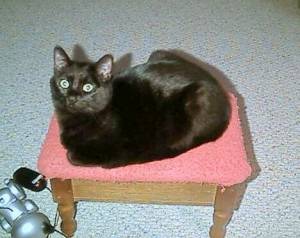 Otherwise, we're having incredibly beautiful, springlike weather. I went on a bike ride the past two days, though I probably won't today. Rain last night created a muddy mess of the dirt road alongside our house, where I ride when I go on my regular excursion.

I'm reading an excellent novel, my first episode with "Chick Lit." I found it in the library, and absolutely LOVE the main character; she is an intellectual/brainiac and (not that I'm on that level) but thinks a great deal like I do. Here's a link for anyone who wishes to read this novel:

I'll close with this quote:


"Most civilized nations compensate for the inadequacy of wages by providing relatively generous public services such as health insurance, free or subsidized child care, subsidized housing, and effective public transporation. But the United States, for all its wealth, leaves its citizens to fend for themselves. What is hard for the non-poor to see is poverty as acute distress: the lunch that consists of Doritos or hot dog rolls, leading to faintness before the end of the shift. The 'home' that is also a car or van." -- Barbara Ehrenreich, Nickel and Dimed
Posted by Cara at 1:38 PM

So sorry to hear about the death of your cat. But I'm sure he was much happier than if he'd had to go to the vet.

I like the quote you included as well - I really enjoyed that book.

Your kitty was beautiful. I know you gave him a lot of love. He must have had a very happy life.