The problem with saying a novel is good when you are only halfway through it is...you may be wrong. It may NOT be good, sometimes depending on the end. As a novelist, I've always felt that the ending of my novels/short stories are extremely important; it underlines the main theme. Would I change the ending if it would mean print publication. No. How can I be certain? Because that exact situation occurred in my past work.

I had sent a manuscript into a publishing house, had a specific genre editor very interested. She suggested some minor changes, which I complied with, but when she said the ending would have to be different, I withdrew the manuscript. So I know a contrived ending (usually by an editor) when I read one; that seems to have been the case with the novel I just read: "Carrie Pilby" by Caren Lissner

There are many brilliant passages, deep philosophical/intellectual thoughts/ponderings throughout the novel, so it's still a worthwhile read. But the ending not only ruins the novel, it simply makes the whole story seem implausible. I won't reveal why, since that would be a spoiler for other readers, but it is obvious to a seasoned novelist. The worst aspect is that the ending maligns the protagonist who is an honest, moral, extremely brilliant young woman; it calls her whole philosophy of life into question. You end up thinking she is dumb by the stupidity of the decision she makes at the end. Was that the intent of the author? I don't think so. More likely it was probably the advice of a genre editor in order to make the story "fit" the chick lit category (i.e. a semblance of ending with a positive outlook for the protagonist). About the only thing worse than bad fiction is dishonest fiction. It's always better that a writer be true to their vision even IF they never get published, IMO.

I went to town yesterday, dropped by the library and got several promising novels. The first one I'll read I'm sure IS an excellent novel: Red Leaves by Thomas Cook, one of my favorite authors. I also got four DVD movies; the library has a small selection that can be checked out. And I finally got "A Million Little Pieces," by James Frey.

Tomorrow DH and I are going to a horse sale in a neighboring county. He wants to look for horse trailers, since he only has one available to sell now. If it's not too cold, it should be interesting. We had downpours all morning, with storms, but now it's sunny and windy. Tonight is supposed to be near 30 though, and only in the 40s tomorrow.

Here's an interesting quote I found online, regarding those with high I.Q. in unsuitable environments for their intellectual gifts:

The second kind of social adaptation may be called the marginal strategy. These individuals were typically born into a lower socio-economic class, without gifted parents, gifted siblings, or gifted friends. Often they did not go to college at all, but instead went right to work immediately after high school, or even before. And although they may superficially appear to have made a good adjustment to their work and friends, neither work nor friends can completely engage their attention. They hunger for more intellectual challenge and more real companionship than their social environment can supply. So they resort to leading a double life. They compartmentalize their life into a public sphere and a private sphere. In public they go through the motions of fulfilling their social roles, whatever they are, but in private they pursue goals of their own. They are often omnivorous readers, and sometimes unusually expert amateurs in specialized subjects. The double life strategy might even be called the genius ploy, as many geniuses in history have worked at menial tasks in order to free themselves for more important work. Socrates, you will remember was a stone mason, Spinoza was a lens grinder, and even Jesus was a carpenter. The exceptionally gifted adult who works as a parking lot attendant while creating new mathematics has adopted an honored way of life and deserves respect for his courage, not criticism for failing to live up to his abilities. Those conformists who adopt the committed strategy may be pillars of their community and make the world go around, but historically, those with truly original minds have more often adopted the double life tactic. They are ones among the gifted who are most likely to make the world go forward.
--From: The Prometheus Society

I'll close with this picture of the view out my living room window: 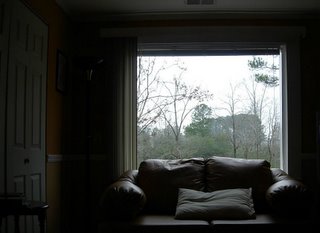 I like this strategy, and tried to follow it myself - secretary by day, educational subversive by night! Unfortunately, the tension created by dealing with the organization I worked for made it unsustainable. I have a NEED to be authentic that is not popular in the corporate world. So I found a different way out, and I've never been happier. What do you think about the strategy?

Hi jo_jo:
I think your strategy is wonderful! I'll definitely check out your blog and website. Thanks for your interesting comment!