I had noticed a couple of miniature horses at a house not far from us on my bicycle rides. The people had small kids, and were keeping these miniatures in a very, very cramped pen. I hated seeing that, because there was just not enough room for the horses. Back in the summer I said something to DH about asking if the people might consider selling the mini's, but he never talked to them. The horses escaped several times, and I think people in the neighborhood were complaining, since it's near a subdivision.

Anyhow, Friday on my bike ride I noticed the pen had become nothing but a huge mud-hole; I felt SO sorry for the miniatures! DH still wouldn't stop to ask about them, but here's the weird thing: Last night the lady who has the miniatures called US, and she was desperate to sell hers. Apparently one is a female mini, and owned by the lady's sister; but she's also thinking of selling it.

Anyhow, when I figured out who was calling, I kept making motions with my hands, saying to DH I wanted those horses! He didn't even act interested! After he hung up though, he said would go look at them after supper. But that I wasn't going! He knows I'd have paid whatever they were asking, and they started out wanting $300.00 for the male gelding mini. Believe it or not, mini's are selling for more than large horses these days. At any rate, DH bought the miniature male gelding and got saddle/tack to go along with him. And DH only paid $150.00. So we now have a miniature horse and his name is: Festus!!! I thought that was so cute!

Here's a photo of him with the other horses (we only have these two now); we're keeping them separate most of the time, but have let him in with them enough to get acquainted and when DH can make sure they don't hurt Festus. 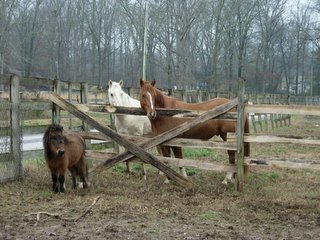 Festus has very thick wooly hair, his winter coat. But he is a chestnut color, and will be beautiful in the spring when he sheds this hair. For now, it keeps him warm. We may still buy the other mini too, if the woman's sister will sell her to us. Since Festus is a gelding though, there won't be any breeding going on. By the way, those little kids were riding Festus; one little girl saddled him up, and rode him all over the yard, DH said. But the kids know where he's at, so they can stop by and see him if they want to.

Soooo cute! I'm sure he'll be much happier with you.