Ahh, living in what seems to be the Sahara desert here, I wouldn't mind even leftover remnants of the approaching Hurricane Rita! We are soooo dry here, the ground is like a rock, and in places it has actually cracked open! The last rain we had was from Katrina, but it was scant, and mostly wind mixed with showers. Afterward our house had swirls of nasty dirt plastered to the white siding, and I had to actually wash it down with the water hose. Last night I was watching a movie and there was a thunderstorm scene, the hard rain streaking down windowpanes; it created an intense longing for rain. Strange how you miss something in nature when it is lacking, not just for the benefits but the sensory aspects.

Nothing new here to write about; life as usual. I can't complain though, since I perfer peace and quiet. Tomorrow morning I have to go for an early medical appointment; my G.P. wanted to have some blood drawn, do a few simple tests like cholesterol and sugar levels, potassium, etc. There's nothing wrong with me that I know of, and I feel fine (except for annoying sinus problems in this dry, hot weather)...but she requested the test. And I would like to know what my cholesterol is, since DH and I try to eat healthy, rarely have any meat whatsoever.

This past weekend we looked at a few houses for sale, and found one that I truly loved. We're not preparing to move, but IF we found an irresistible bargain, we might. Anyhow, this house was located in the city, a fairly nice neighborhood but across town from our other house; it was built in 1916, and at one time someone had done quite a bit of restoration. However, it has been empty two years, a foreclosure, and needs a lot of work. It has much of the original woodwork, hardwood floors, a beautiful fireplace in the "parlor" and is two stories with a half-basement/cellar. The price is at $69,900.00 -- not out of our leaque, though we wouldn't want to pay the entire price in cash, since we'd need money to start more renovations. However, I don't think we'll buy it. I just hate to see such a lovely old house sitting there in overgrown weeds, neglected. The neighbors told us there was even an auction, but the bank wouldn't accept the highest bid. So I doubt they'd take much less than the asking price. I do hope someone comes along and buys it, lavishing time and attention on the house.

Here's a photo of the house:

I was wondering what happened to the huge old house used in the recent film, "The Skeleton Key." It was located in southern Louisiana somewhere, and had scenes of downtown New Orleans too. We saw it a few weeks ago, and I had tried to track down where the house was located, but learned that the film company was not publicizing it due to the 90+ year old couple who lived there! So it's possible the house was destroyed by Hurricane Katrina; I hope the elderly couple survived.

And speaking of hurricanes, there's another one threatening the Gulf area, Hurricane Rita. It's still a bit early to know exactly where it'll make landfall, but IF it does hit the Texas coast, there may be more oil rigs and refineries damaged -- not to mention people hurt and/or killed. Time will tell, I guess. I don't envy those living in coastal areas -- not now, nor in the future IF the global warming situation creates rising sea levels, terrible flooding and loss of land mass.

I'll end with this photo of my tub of flowers on the steps of our back deck, still blooming as long as I water them faithfully! 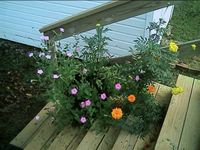