Still working here, although we'll take a break today and head for the building supply. I swear that Marvin's and Lowe's are getting RICH off us alone!

I wanted to post some photos of the exterior of the remodeled, enclosed backporch; we need to finish up the painting yet (the steps/lattice and trim) but these show how much we've already accomplished.

In the first poll taken since the Thursday night debate, Kerry was running even with Bush after having trailed him in the same survey last month. The Newsweek poll showed Kerry had the support of 47 percent and Bush 45 percent, with independent candidate Ralph Nader at 2 percent.

Hoorah!!! Now if those Nader voters would only get on board with Kerry. After all, Kerry's policies have way more in common with their issues than Bush. So if you are an independent, PLEASE consider voting Kerry this time around. We just might be able to oust Bush -- providing he doesn't steal this election like he did the last one. 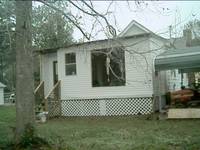 Back of house now, with sunroom/carport