Late February, and I'm dreaming of spring already! We had two near-perfect days this past weekend: sunny, mild, light breeze. Saturday I took the dogs to the lakeside park, and we walked the entire trail, as well as just sat on a bench staring at the ducks and geese frolicking in the lake. Some people out, but not as many as I'd expected.

When I got home, I decided to make a run to a nearby garden shop. I picked up some seed, since I may want to do starter-cups for tomatoes, peppers, etc. inside and then transplant into the garden in late March or early April. I can't wait for fresh spinach, Swiss Chard and lettuce. I'm also planning a turnip patch separate from the main small garden.

I spent the remainder of Saturday digging in the dirt! My last tenant had started a composting area in one corner of the yard, and I covered it in straw, let it lie dormant. Saturday I got my pitchfork out there, and raked it up, turned it over, tried to get most of the few weeds up. Then I put my plastic fencing around the space to keep the dogs off of it. The dirt is rich, black gold now and I'm hoping to produce a lot of veggies off that small space. Although the spot is shaded in the photos below, it does get lots of sunshine until late afternoon. As the sun changes position in spring/summer, it'll get even more sunlight.

I'm also planning the other corner for the turnip patch; long narrow sections beside the fence on either side of the yard for several longer rows -- probably tomatoes or English peas/green beans. Having separate smaller spaces will be easier for me to manage than one huge site like last year.

I met the potential buyers of my other house last Thursday when my sister was here; we'd dropped by to pick up something out of the storage shed for her. The buyers pulled up, said they were there to meet the house inspector. We talked awhile, they seem like a nice middle age couple, and eager to buy the house. The next day the realtor called and said the house inspection was fine, nothing for me to repair. Relief! So now I'm just waiting to hear if their loan is approved (and it's looking good according to the realtor); should know something by next weekend. And within 30 days we should be closing. It'll be a relief not to have two houses, believe me.

I'm still waiting on the final forms from my financial investments so I can get my income tax return ready. Anxious to get that over with!

At any rate, here's a few photos of the garden spot prepping I did Saturday. 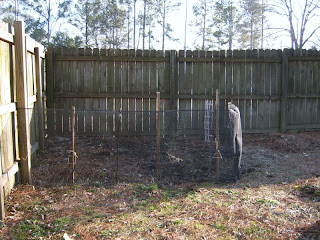 I have a gate at one end of this fencing, the white links are part of the gate so I can enter/exit. 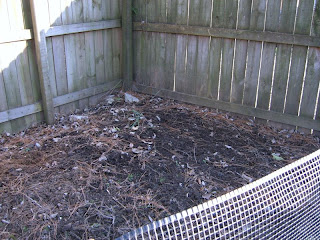 A close-up of the garden soil. 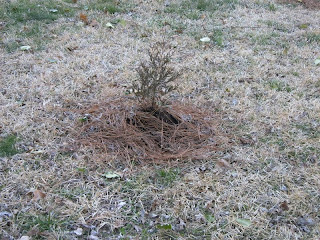 The small cedar I transplanted in the back yard; got it off the creek bank on a walk with the dogs. Keeping fingers crossed it lives!

If you know the identity of the two following tree/flower photos, please leave a message in the comments section. Thanks! (Enlarge for big picture) 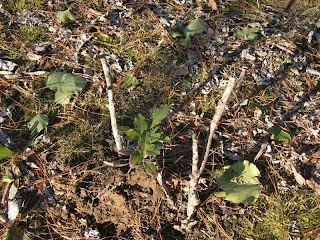 Anyone know what this is? I've staked it with sticks on either side, so as not to forget where I transplanted it in the back yard. Kinda looks like a peach or apple tree to me, but not sure. Found several growing in the compost pile, and removed to spots in the back yard. 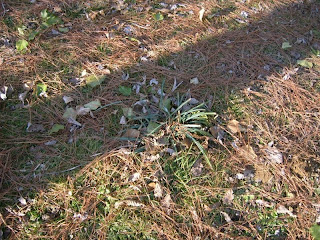 Anyone know what this is? Looks like some kind of day lily; there's several in the back of the yard, always bloom in spring.

I've added a link in the left sidebar to my past "Childfree by Choice" articles archived at Suite101.com. Those were originally written in 2000, but thought some of you might like to read them. I still get requests to reprint/post at various childfree blogs/publications; the number of childfree people is still strong and growing.

I'm working on a special annual tribute to my husband for later this week; it'll be four years since his death on the 25th of February. I've chosen some pictures to post as well.