Not just a stormy day, rather a wild weather pattern that hit here in our region.

I knew there were serious weather bulletins, but as the hot, sultry day progressed, the wind became wildly violent. Around one o'clock we lost power for about an hour or so. No rain, just hard wind that apparently damaged power lines. The sun was actually shining at that time.

The clouds were flying like a Frisbee, scuttling across the sky -- first dark, then clearing, then dark again.

That went on for a couple hours, no lightning or thunder, just the hard wind and speeding clouds. Wendell & Sherry stopped by, planted some tomato plants they'd gotten free at a garden supply store because the containers had overturned. Nearly a half row of those, not bad.

About ten minutes after they left, all hell broke loose -- driving rain which turned into quarter sized hail. Thank goodness my car was inside the carport! I made a video clip, but won't post it.

Now it's sunny, but still having a few off-and-on showers.

Are we in Kansas yet? LOL Just hope the tomatoes and cabbage plants survived! From the news, I think there is damage north of here as well as across much of the region.

I spent most of that time cooking black bean barbecue veggie burgers, and they are YUMMY! Had plenty for freezer, and saved a bunch of money by making them from scratch. 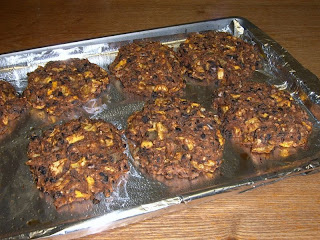 Yum. I'd tell you the secret ingredients, but then I'd have to kill you. LOL One is missing -- for my meal!

Here's a photo of the hail: 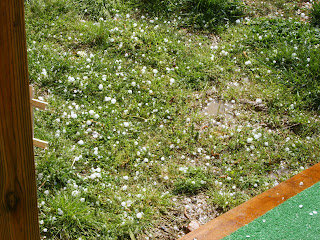 Fine meal on the photo!