Sometimes I read the newsgroups, and I found an interesting message from a member of the younger generation in America tonight. An older person had said that they didn't know how the younger folks survived in our current society...and this is what the younger one answered:


I don't know how any of us survive in today's world either. This society is so hideous, so cruel, so oppressive.

But, the balance will be rectified soon, I believe. We have produced a society here that is full of idiots who cannot digest even the most basic of facts. They live in a cotton-candy fantasy world, with nothing to keep their pulse going except empty-headed materialism. They consume and they consume, proving Agent Smith correct that the human organism is not a mammal, but a virus. The more wealth they produce, the more ignorant they become. We are one of the few societies in history that has managed to produce riches beyond the dreams of avarice, yet managed to get progressively more and more ignorant as time goes by. We don't care so long as our stomachs are full, bellies fat, and SUVs full of gas.

These people, who know nothing, are then given the right to vote. The intelligent and the stupid are given an equal say about matters of policy. As a result, the policies are, surprisingly, unintelligent and extremely stupid. Body builders get elected as governor of a state that is larger than most countries, and an illiterate yob is made President. A crusading policy has been set in place, and now we proceed to go enlighten the world while we know nothing about it, and have produced one of the most unenlightened, spiritually vapid, and cruel societies on Earth. We find that nobody wants our "enlightenment," and everybody fights us tooth in nail, and we arrogantly lie back and yawningly proclaim, "They hate us because of our freedom."

On the other side of the world, we and the European societies have spent the past few centuries destroying all the rest of the world, producing volcanoes of wrath everywhere that we have gone. We decided to pillage Iran for several decades, support a violent, militarist dictatorship that impoverished the country, and now that same place is ruled by religious fundamentalists who decided to throw out the militarist dictatorship, replacing one type of tyranny with another. Then, in the 90s, it seemed that things might be ok there, that cooler heads had prevailed, but the illiterate yob in the White House had to rattle his sabres and prattle on like a ninny about an axis of evil, and now those cool heads are gone and the Theo-Nazis are back in power, struggling to get nuclear weapons, and intent upon provoking a nuclear holocaust at all costs, in order to hasten the return of their lost Twelfth Imam. Eventually the fanatics, in some place or another, will get their weapons of mass destruction (which we invented, our gift to the world), and then...boom. All the stupidity, all the empty-headed nonsensical materialism, the whole order, will be laid to dust.

What's left of the legion of fools will be helpless without their cell phones, their SUVs, or their Fox News to tell them what to think. Most likely, they will simply be consumed by the animals. Years of Taco Bell and Burger King has done nothing but fatten them up for the slaughter, making them too stupid and too sedated to escape. The beasts make the checkmate.

The long, dark night is beginning, I think.

Oh my, I do often think this way myself. And even IF life continues on unabated, I believe this "younger generation" will curse their parents for what they've left them with. Dare I say I'm sooo glad I didn't have children who would inherit the whirlwind?

Nope, I just rescue mistreated animals. That's almost enough to keep me living...but on my darker days, not even that is enough. In fact, just the opposite: I cannot tolerate the horrible cruelty that is in human nature. Ugly. Nasty. Abusers. Killers. All the lot of us. Maybe we deserve our own self-destruction?

Ah well, such are my darker thoughts.

For now, I will end this rant with a photo I took one afternoon recently. The sky looked very strange as rain clouds moved out and cold front came in... 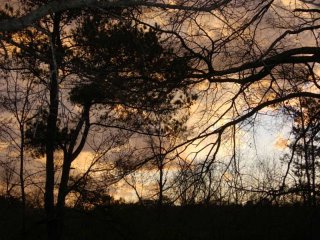